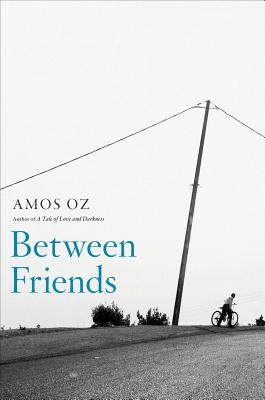 “Oz lifts the veil on kibbutz existence without palaver. His pinpoint descriptions are pared to perfection . . . His people twitch with life.” — Scotsman

In Between Friends, Amos Oz returns to the kibbutz of the late 1950s, the time and place where his writing began. These eight interconnected stories, set in the fictitious Kibbutz Yekhat, draw masterly profiles of idealistic men and women enduring personal hardships in the shadow of one of the greatest collective dreams of the twentieth century.

A devoted father who fails to challenge his daughter’s lover, an old friend, a man his own age; an elderly gardener who carries on his shoulders the sorrows of the world; a woman writing poignant letters to her husband’s mistress—amid this motley group of people, a man named Martin attempts to teach everyone Esperanto.

Each of these stories is a luminous human and literary study; together they offer an eloquent portrait of an idea and of a charged and fascinating epoch. Amos Oz at home. And at his best.

Translated from the Hebrew by Sondra Silverston

Praise For Between Friends…

"[An] intricately interwoven skein of eight new stories. . . “Between Friends” richly satisfies. . . One savors these moody miniatures of the kibbutz past (gracefully translated by Sondra Silverston) for their jazzlike variations; each elegantly underscores the uncertain fates awaiting both the lonely individual and the community."—Forward

"The mind is a place Oz explores masterfully in all its contradiction, texture and heartache. Between Friends paints the daily lives behind utopian dreams, fully realized."
—New York Daily News

"[A] deeply affecting chamber piece [that] draws on…the contradictory urges that lie at the heart of Israel’s psyche."
—Ben Lawrence, The Telegraph (UK)

"Oz lifts the veil on kibbutz existence without palaver. His pin-point descriptions are pared to perfection… His people twitch with life."
—Scotsman (UK)

"Lucid and heartbreaking… Oz explores the always uncertain relationships between men and women, parents and children, friends and enemies, in a clear, clipped language perfectly suited to the laconic tone of the narrative and impeccably rendered into English by Sondra Silverston"
—Alberto Manguel, Guardian (UK)

"A collection of stories….that boasts the sense, scope and unity of a novel…Breathtaking."
—Irish Examiner (Ireland)

"A complex and melancholic vision of people struggling to transcend their individuality for the sake of mundanely idealistic goals."
—Times Literary Supplement (UK)

"All Israeli life is here, rendered in loving detail."
—Mail on Sunday (UK)