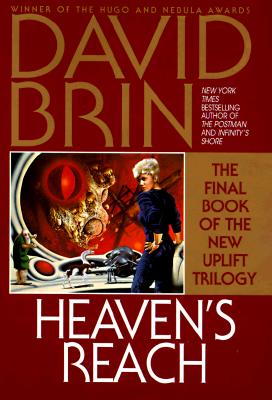 In "Brightness Reef" and "Infinity's Shore," David Brin boldly returned to the Uplift universe he so brilliantly invented in the Nebula and Hugo award-winning trilogy "Sundiver, Startide Rising," and "The Uplift War." Now he concludes this second trilogy with his most imaginative and emotionally powerful novel to date--the shattering epic of a universe poised on the brink of revelation...or annihilation.
After centuries of mutual peace, the "sooner" experiment on planet Jijo is coming to a tragic end. The six fugitive races that escaped there from the Five Galaxies have been discovered by ancient enemies. The terrifying Jophur have plans for the exiled inhabitants: a program of genocide and forced breeding to suit their own perverted needs.
The Jijoans' only hope is the very ship that inadvertently led the Jophur to their obscure planet. The Earthship "Streaker," crewed by uplifted dolphins, commanded by an untested human, engages the Jophur in a desperate race to a mysterious point in space that could well mean the destruction of them both. Yet more than just the fate of Jijo hangs in the balance. For "Streaker" carries a cargo of ancient artifacts that may unlock the secret of the Progenitors, the mythical race that first brought sapience to the galaxies. Some believe a dire prophecy is already coming to pass: an age of terrifying changes in time and space that could end galactic civilization.
Against this apocalyptic backdrop, sapient beings, both human and alien, must come together to face the ultimate crisis. An uplifted chimpanzee scout must overcome prejudice and his own limitations to survive the bizarre terrors of increasingly unstable hyperspace. A brilliantscientist attempts to wrest order from onrushing chaos. "Streaker"'s commander will push the limits of courage and skill as she plunges her crew headlong into the unknown. And two lovers from Jijo, prisoners of the Jophur, embark on a perilous journey, which will either transform them...or destroy them.
Already dozens of white dwarf stars stand ready to explode, as if guided by an unseen hand, while countless reclusive Old Ones gather in search of ultimate transcendence.
As worlds are sundered and hyperspace becomes impassable, the survival of sentient life in the universe rests on an improbable hope: that age-old antagonists of different races can at last recognize the unity of all consciousness.
Once again David Brin has combined brilliant intellectual speculation, dazzling characterization, and breakneck action in a novel that reaches the pinnacle of achievement: a galactic panorama of wonder and wisdom, insight and adventure, in which he reveals mysteries that may lie at the heart of the universe.
or
Not Currently Available for Direct Purchase
Copyright © 2020 American Booksellers Association