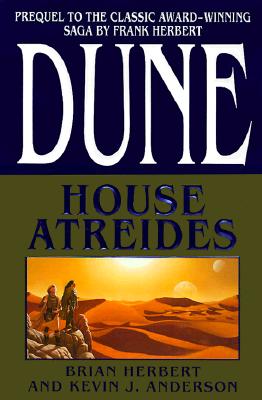 THE EPIC PREQUEL TO "DUNE"

""DUNE: HOUSE ATREIDES" is a terrific prequel, but it is also a first-rate adventure on its own. Frank Herbert would surely be delighted and proud of this continuation of his vision."--Dean Koontz

Frank Herbert's "Dune" chronicles became an enduring classic and the most popular science fiction series of all time. Working from recently discovered files left by his father, Brian Herbert and best-selling novelist Kevin J. Anderson bring us Dune: House Atreides, the prequel, which captures all the complexity and grand themes of the original work while weaving a new tapestry of great passion and momentous destiny into a saga that expands the tale written by Frank Herbert more than thirty years ago.

Complex, brilliant, and prophetic, Frank Herbert's award-winning Dune chronicles captured the imaginations of millions of readers worldwide--and transformed their perception of what the future could be. By his death in 1986, Frank Herbert had completed six novels in the Dune series. But much of his vision--vast, sprawling, and multilayered--remained unwritten. Now, working from recently discovered files left by his father, Brian Herbert and bestselling novelist Kevin J. Anderson collaborate on a new novel, the first volume in the prequel to Dune--where we step onto planet Arrakis...decades before Dune's hero, Paul Atreides, walks its sands. --
Beginning nearly four decades before "Dune," House Atreides introduces pivotal characters, alliances, base treacheries, and bright hopes that form the foundation of "Dune," On the planet Arrakis, an aging tyrant sits on the Golden Lion Throne and rules all of the known universe, while his son grows dangerously impatientfor the crown. A quasi-religious order of black-robed women move their secret breeding program one momentous step closer to creating a god-child they call the Kwisatz Haderach. And a minor family among the nobility, House Atreides, chooses a course of honor that will bring it to destruction at the hands of its mortal enemy, House Harkonnen--or take it to new heights of power.
Here is the rich and complex world that Frank Herbert created in his classic series, in the time leading up to the momentous events of "Dune," As Emperor Elrood's son Shaddam plots a subtle regicide, young Leto Atreides leaves his lush, water-rich planet for a year's education on the mechanized world of Ix; a planetologist named Pardot Kynes is dispatched by the Emperor to the desert planet Arrakis, or Dune, to discover the secrets of the addictive spice known as melange; and the eight-year-old slave Duncan Idaho is hunted by his cruel masters in a terrifying game from which he vows escape and vengeance. But none can envision the fate in store for them: one that will make them renegades--and shapers of history.
Covering the decade when Shaddam wins his throne, the teenager Leo Atreides becomes unexpectedly the rule of House Atreides, and Pardot Kynes uncovers one of the planet Dune's greatest secrets, House Atreides stands next to "Dune" in its power and scope. While this new novel solves some of "Dune"'s most baffling mysteries, it presents new puzzles springing from the sands where one day Paul Muad'Dib Atreides will walk. But now, in the years before Paul's birth, an unforgettable new epic begins. Fans of the "Dune" chronicles will relish the opportunity to return to the rich and exotic universe createdby Frank Herbert, while new readers will be introduced to an incomparable imagination--a future where the fate of the entire cosmos is at stake.

The Story Behind "Dune: House Atreides"
by Brian Herbert
When my father first sat down with me to go over one of my manuscripts, he told me that he couldn't teach me how to write; instead, he would teach me what he called "the care and feeding of editors": how to make manuscripts look presentable so that they wouldn't be tossed into a slush pile, unread. He then proceeded to teach me how to write. I remember many instances when we would brainstorm ideas and dissect my own novel manuscripts. He taught me how to develop worlds, to create characters, to invent action...and to describe all of it. We collaborated on the novel Man of Two Worlds, Frank Herbert's last published work, and even talked about working together on a new "Dune" novel, but we'd set no date, had established no specific details or direction.
That novel was not to be. When my father died in 1986, he left several projects unfinished. For years there were rumors that I would write another novel set in my father's "Dune" universe, a sequel to the sixth book in the series, Chapterhouse: Dune. Prominent writers approached me with offers of collaboration, but in tossing ideas around with them I couldn't visualize the project coming to fruition. They were excellent writers, but in combination with them I didn't feel the necessary synergy for such a monumental task. Along with Tolkien's "The Lord of the Rings" and a handful of other works, "Dune" stood as one of the greatest creative achievements of all time, and arguably the greatest example of science fictionworld-building in the history of literature. For the sake of my father's legacy, I could not select the wrong person.
It wasn't until I began conversation with Kevin J. Anderson, a critically acclaimed and internationally best-selling author, that I found someone whose enthusiasm and passion for the "Dune" universe match my own. Much of Kevin's writing had been influenced heavily by the work of Frank Herbert. I read everything I could get my hands on that Kevin had written, and did more checking on him. It soon became clear that he was a brilliant writer and that his reputation was sterling. We hit it off immediately, both on a personal and professional level; new story ideas fairly exploded from our minds and together, we found the energy to tackle such a massive project.
Frank Herbert had left behind literally thousands of pages of notes, idea