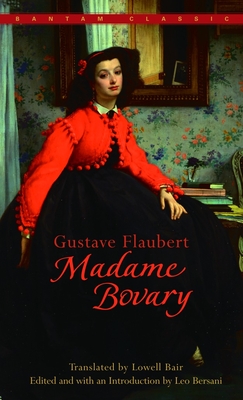 This exquisite novel tells the story of one of the most compelling heroines in modern literature--Emma Bovary.

"Madame Bovary has a perfection that not only stamps it, but that makes it stand almost alone; it holds itself with such a supreme unapproachable assurance as both excites and defies judgement." - Henry James

Unhappily married to a devoted, clumsy provincial doctor, Emma revolts against the ordinariness of her life by pursuing voluptuous dreams of ecstasy and love. But her sensuous and sentimental desires lead her only to suffering corruption and downfall. A brilliant psychological portrait, Madame Bovary searingly depicts the human mind in search of transcendence. Who is Madame Bovary? Flaubert's answer to this question was superb: "Madame Bovary, c'est moi." Acclaimed as a masterpiece upon its publication in 1857, the work catapulted Flaubert to the ranks of the world's greatest novelists. This volume, with its fine translation by Lowell Bair, a perceptive introduction by Leo Bersani, and a complete supplement of essays and critical comments, is the indispensable Madame Bovary.

The great French novelist was born in Rouen in 1821, son of a distinguished surgeon. He studied law briefly, but in 1844 he was struck with epilepsy–it was the first of a series of violent fits that filled Flaubert’s life with apprehension and drove him to lead a hermit’s life. Having been attracted to literature at an early age, he soon turned his entire attention to writing. His first novel, Madame Bovary, won instant fame upon his publication in 1857: Flaubert was sued for “immorality,” but was later acquitted.

An avid traveler, his fundamentally romantic nature reveling in the exotic, Flaubert went to Tunisia to research his second novel, Salammbo (1862). Both Salammbo and The Sentimental Education (1869) were poorly received, and Flaubert’s genius was not publicly recognized until his masterful Three Tales (1877). Among his literary peers, his reputation was extraordinary, and he formed lasting friendships with Turgenev, George Sand, and the Goncourt brothers.

Despite his reputation as a master of realists, he was not fundamentally a realistic novelist. Flaubert’s aim was to achieve a rigidly objective form of art, presented in the most perfect form. His obsession with his craft is legendary: he could work seven hours a day, many days on end, on a single page, trying to attune his style to his ideal of balanced harmony, seeking always le mot juste.

In 1875 Flaubert sacrificed his modest fortune to help his niece, Caroline, and as a result his last years were marked by financial worry and bitter isolation. He died suddenly in May, 1880, leaving his last work, Bouvard and Pécuchet unfinished.
Loading...
or support indie stores by buying on