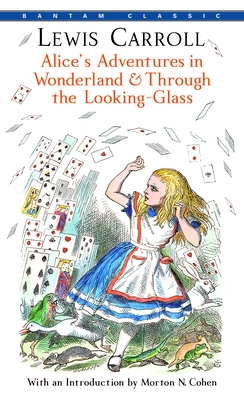 Alice's Adventures in Wonderland & Through the Looking-Glass

In 1862 Charles Lutwidge Dodgson, a shy Oxford mathematician with a stammer, created a story about a little girl tumbling down a rabbit hole. Thus began the immortal adventures of Alice, perhaps the most popular heroine in English literature.

Countless scholars have tried to define the charm of the Alice books—with those wonderfully eccentric characters the Queen of Hearts, Tweedledum, and Tweedledee, the Cheshire Cat, Mock Turtle, the Mad Hatter et al.—by proclaiming that they really comprise a satire on language, a political allegory, a parody of Victorian children’s literature, even a reflection of contemporary ecclesiastical history.

Perhaps, as Dodgson might have said, Alice is no more than a dream, a fairy tale about the trials and tribulations of growing up—or down, or all turned round—as seen through the expert eyes of a child.

Praise For Alice's Adventures in Wonderland & Through the Looking-Glass…

As a mathematician Dodgson is best known for Euclid and His Modern Rivals (1879). He was also a superb children’s photographer, who captured the delicate, sensuous beauty of such little girls as Alice Liddell and Ellen Terry, the future actress. W.H. Auden called him “one of the best portrait photographer of the century.” Dodgson was also an inventor; his projects included a game of arithmetic croquet, a substitute for glue, and an apparatus for making notes in the dark. Though he sought publication for his light verse, he never dreamed his true gift–telling stories to children–merited publication or lasting fame, and he avoided publicity scrupulously Charles Dodgson died in 1898 of influenza.
Loading...
or support indie stores by buying on