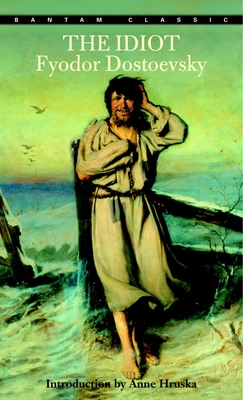 “My intention is to portray a truly beautiful soul.” —Dostoevsky

Despite the harsh circumstances besetting his own life—abject poverty, incessant gambling, the death of his youngest child—Dostoevsky produced a second masterpiece, The Idiot, after completing Crime and Punishment. In it, a saintly man, Prince Myshkin, is thrust into the heart of a society more concerned with wealth, power, and sexual conquest than with the ideals of Christianity. Myshkin soon finds himself at the center of a violent love triangle in which a notorious woman and a beautiful young girl become rivals for his affections.

Extortion, scandal, and murder follow, testing Myshkin’s moral feelings, as Dostoevsky searches through the wreckage left by human misery to find “man in man.” The Idiot is a quintessentially Russian novel, one that penetrates the complex psyche of the Russian people. “They call me a psychologist,” wrote Dostoevsky. “That is not true. I’m only a realist in the higher sense; that is, I portray all the depths of the human soul.”

Fyodor Mikailovich Dostoevsky’s life was a dark and dramatic as the great novels he wrote. He was born in Moscow in 1821, the son of a former army surgeon whose drunken brutality led his own serfs to murder him by pouring vodka down his throat until he strangled. A short first novel, Poor Folk (1846) brought him instant success, but his writing career was cut short by his arrest for alleged subversion against Tsar Nicholas I in 1849. In prison he was given the “silent treatment” for eight months (guards even wore velvet soled boots) before he was led in front a firing squad. Dressed in death shroud, he faced an open grave and awaited execution, when suddenly, an order arrived commuting his sentence. He then spent four years at hard labor in a Siberian prison, where he began to suffer from epilepsy, and he only returned to St. Petersburg a full ten years after he had left in chains.

His prison experiences coupled with his conversion to a conservative and profoundly religious philosophy formed the basis for his great novels. But it was his fortuitous marriage to Anna Snitkina, following a period of utter destitution brought about by his compulsive gambling, that gave Dostoevsky the emotional stability to complete Crime and Punishment (1866), The Idiot (1868-69), The Possessed (1871-72), and The Brothers Karamazov (1879-80). When Dostoevsky died in 1881, he left a legacy of masterworks that influenced the great thinkers and writers of the Western world and immortalized him as a giant among writers of world literature.

Praise For The Idiot…

“Nothing is outside Dostoevsky’s province. . . . Out of Shakespeare there is no more exciting reading.” —Virginia Woolf
or support indie stores by buying on
Copyright © 2020 American Booksellers Association