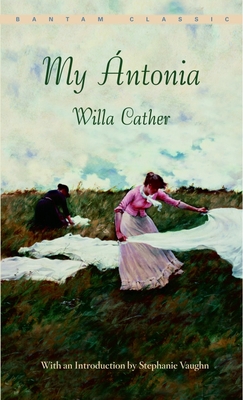 "The best thing I've done is My Antonia," recalled Willa Cather. "I feel I've made a contribution to American letters with that book."

Ántonia Shimerda returns to Black Hawk, Nebraska, to make a fresh start after eloping with a railway conductor following the tragic death of her father. Accustomed to living in a sod house and toiling alongside the men in the fields, she is unprepared for the lecherous reaction her lush sensuality provokes when she moves to the city. Despite betrayal and crushing opposition, Ántonia steadfastly pursues her quest for happiness—a moving struggle that mirrors the quiet drama of the American landscape.

Praise For My Ántonia…

"No romantic novel ever  written in America, by man or woman, is one half so  beautiful as My  Antonia."—H.L. Mencken

Wila Cather was probably born in Virginia in 1873, although her parents did not register the date, and it is probably incorrectly given on her tombstone. Because she is so famous for her Nebraska novels, many people assume she was born there, but Wila Cather was about nine years old when her family moved to a small Nebraska frontier town called Red Cloud that was populated by immigrant Swedes, Bohemians, Germans, Poles, Czechs, and Russians. The oldest of seven children, she was educated at home, studied with a Latin neighbor, and read the English classics in the evening. By the time she went to the University of Nebraska in 1891–where she began by wearing boy’s clothes and cut her hair close to her head–she had decided to be a writer.

After graduation she worked for a Lincoln, Nebraska, newspaper, then moved to Pittsburgh and finally to New York City. There she joined McClure’s magazine, a popular muckraking periodical that encouraged the writing of new young authors. After meeting the author Sarah Orne Jewett, she decided to quit journalism and devote herself full time to fiction. Her first novel, Alexander’s Bridge, appeared in serial form in McClure’s in 1912. But her place in American literature was established with her first Nebraska novel, O Pioneers!, published in 1913, which was followed by her most famous pioneer novel, My Antonia, in 1918. In 1922 she won the Pulitzer Prize for one of her lesser-known books. One of Ours. Death Comes for the Archbishop (1927), her masterpiece, and Shadows on the Rock (1931) also celebrated the pioneer spirit, but in the Southwest and French Canada. Her other novels include The Song of the Lark (1915), The Professor’s House (1925), My Mortal Enemy (1926), and Lucy Gayheart (1935). Wila Cather died in 1947.
Loading...
or
Not Currently Available for Direct Purchase