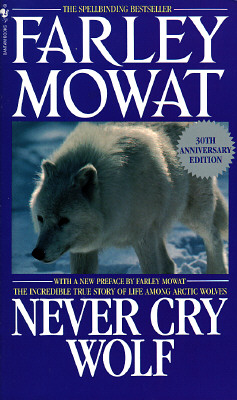 Hordes of bloodthirsty wolves are slaughtering the arctic caribou, and the government's Wildlife Service assigns naturalist Farely Mowat to investigate. Mowat is dropped alone onto the frozen tundra, where he begins his mission to live among the howling wolf packs and study their waves. Contact with his quarry comes quickly, and Mowat discovers not a den of marauding killers but a courageous family of skillful providers and devoted protectors of their young. As Mowat comes closer to the wolf world, he comes to fear with them on onslaught of bounty hunters and government exterminators out to erase the noble wolf community from the Arctic. "Never Cry Wolf" is one of the brilliant narratives on the myth and magical world of wild wolves and man's true place among the creatures of nature. "We have doomed the wolf not for what it is, but for what we deliberately and mistakenly perceive it to be -- the mythological epitome of a savage, ruthless killer -- which is, in reality, no more than the reflected image of ourself." -- from the new preface to "Never Cry Wolf,"