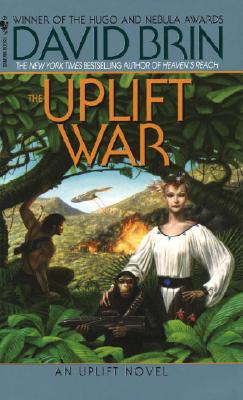 David Brin's Uplift novels are among the most thrilling and extraordinary science fiction ever written.  Sundiver, Startide Rising, and The Uplift War--a New York Times bestseller--together make up one of the most beloved sagas of all time.  Brin's tales are set in a future universe in which no species can reach sentience without being "uplifted" by a patron race.  But the greatest mystery of all remains unsolved: who uplifted humankind?

As galactic armadas clash in quest of the ancient fleet of the Progenitors, a brutal alien race seizes the dying planet of Garth.  The various uplifted inhabitants of Garth must battle their overlords or face ultimate extinction.  At stake is the existence of Terran society and Earth, and the fate of the entire Five Galaxies.  Sweeping, brilliantly crafted, inventive and dramatic, The Uplift War is an unforgettable story of adventure and wonder from one of today's science fiction greats.

David Brin is a scientist and the bestselling author of Sundiver, The Uplift War, Startide Rising, The Practice Effect, The Postman, Heart of the Comet (with Gregory Benford), Earth, Glory Season, Brightness Reef, and Infinity's Shore, as well as the short-story collections The River of Time and Otherness. He has a doctorate in astrophysics and has been a NASA consultant and a physics professor.

Praise For The Uplift War…

"The Uplift books are as compulsive reading as anything ever published in the genre."
--The Encyclopedia of Science Fiction
or
Not Currently Available for Direct Purchase
Copyright © 2020 American Booksellers Association