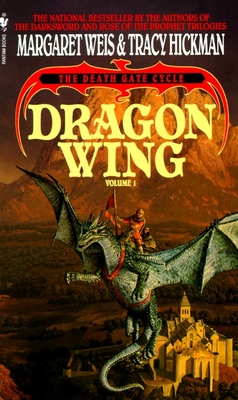 Ages ago, sorcerers of unmatched power sundered a world into four realms—sky, stone, fire, and water—then vanished. Over time, magicians learned to work spells only in their own realms and forgot the others. Now only the few who have survived the Labyrinth and crossed the Death Gate know of the presence of all four realms—and even they have yet to unravel the mysteries of their severed world. . . .

In Arianus, Realm of Sky, humans, elves, and dwarves battle for control of precious water—traversing a world of airborne islands on currents of elven magic and the backs of mammoth dragons. But soon great magical forces will begin to rend the fabric of this delicate land. An assassin will be hired to kill a royal prince—by the king himself. A dwarf will challenge the beliefs of his people—and lead them in rebellion. And a sinister wizard will enact his plan to rule Arianus—a plan that may be felt far beyond the Realm of Sky and into the Death Gate itself.

Margaret Weis was born and raised in Independence, Missouri. She attended the University of Missouri, Columbia, graduating in 1970 with a BA in creative writing. In 1983, Weis was hired as book editor at TSR, Inc., producers of the Dungeons and Dragons role-playing game. Here she met game designer Tracy Hickman and the two teamed up to write the bestselling Dragonlance novels. Weis has two children, David and Elizabeth Baldwin. Weis and husband Don Perrin live in a converted barn in Wisconsin with two collie dogs, Laddie and Robbie; a Sheltie, Jo-jo; and two cats, Nickolai Mouse-slayer and Motley Tatters.

Tracy Raye Hickman was born in Salt Lake City. He currently resides in a large Victorian home he built for his wife and four children in the tall mountain pines of Flagstaff, Arizona. He has co-authored with Margaret Weis four New York Times bestselling series, including the Death Gate Cycle and the Dragonlance series which have more than eleven million copies in print and has published his own solo works as well.
or
Buy Here
Copyright © 2020 American Booksellers Association