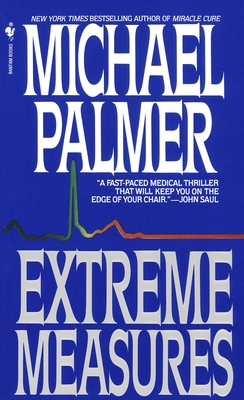 Dr. Eric Najarian. He's young, talented, and ambitious. He has all the qualities they're looking for at White Memorial Hospital. He doesn't know he's being watched. Judged. An elite clique of medical professionals thinks he has what it takes to join their secret club. All the young doctor has to do is agree to play by their rules.

But Eric has already seen too much. A missing corpse. An unspeakable mutilation. A brutal abduction. It's only the beginning of a plot of terrifying evil. A sinister plan the group will stop at nothing to hide. And if Eric refuses to become their colleague--he will be their next victim.

Praise For Extreme Measures: A Novel…

"Spellbinding...a chillingly sinister novel made all the more frightening by [Palmer's] medical authority
The Denver Post

Michael Palmer, MD, (1942–2013) was the author of Miracle Cure, Critical Judgment, Silent Treatment, Natural Causes, Extreme Measures, Flashback, Side Effects, and The Sisterhood. His books have been translated into thirty-five languages. He trained in internal medicine at Boston City and Massachusetts General hospitals, spent twenty years as a full-time practitioner of internal and emergency medicine, and served as an associate director of the Massachusetts Medical Society’s physician health program.
Loading...
or
Not Currently Available for Direct Purchase