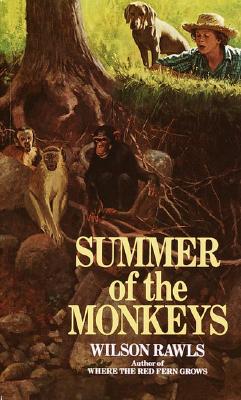 Summer of the Monkeys

Monkeys Out In The Middle Of Nowhere Staring At Him!

A tree full of monkeys the last thing fourteen-year-old Jay Berry Lee thought he'd find on one of his treks through Oklahoma's Cherokee Ozarks. Jay learns from his grandfather that the monkeys have escaped from a circus and there is a big reward for anyone who finds them. He knows how much his family needs the money. Jay is determined to catch the monkeys. It's a summer of thrills and dangers no one will ever forget.

Praise For Summer of the Monkeys…

Honors and Praise for Wilson Rawls’ Where the Red Fern Grows:

Over 7 million copies in print!

“A rewarding book . . . [with] careful, precise observation, all of it rightly phrased.” —The New York Times Book Review

“Written with so much feeling and sentiment that adults as well as children are drawn with a passion.” —Arizona Daily Star