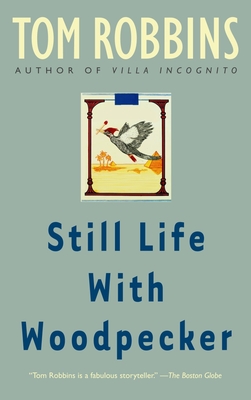 Still Life with Woodpecker is a sort of a love story that takes place inside a pack of Camel cigarettes. It reveals the purpose of the moon, explains the difference between criminals and outlaws, examines the conflict between social activism and romantic individualism, and paints a portrait of contemporary society that includes powerful Arabs, exiled royalty, and pregnant cheerleaders. It also deals with the problem of redheads.

Praise For Still Life with Woodpecker: A Novel…

Tom Robbins has been called “a vital natural resource” by The Oregonian, “one of the wildest and most entertaining novelists in the world” by the Financial Times of London, and “the most dangerous writer in the world today” by Fernanda Pivano of Italy’s Corriere della Sera. A Southerner by birth, Robbins has lived in and around Seattle since 1962.
Loading...
or support indie stores by buying on