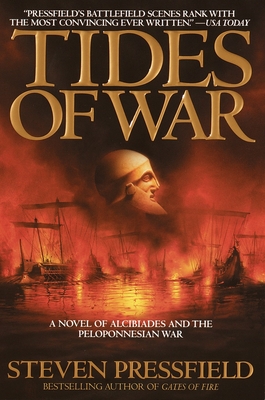 Brilliant at war, a master of politics, and a charismatic lover, Alcibiades was Athens’ favorite son and the city’s greatest general.

A prodigal follower of Socrates, he embodied both the best and the worst of the Golden Age of Greece. A commander on both land and sea, he led his armies to victory after victory.

But like the heroes in a great Greek tragedy, he was a victim of his own pride, arrogance, excess, and ambition. Accused of crimes against the state, he was banished from his beloved Athens, only to take up arms in the service of his former enemies.

For nearly three decades, Greece burned with war and Alcibiades helped bring victories to both sides — and ended up trusted by neither.

Narrated from death row by Alcibiades’ bodyguard and assassin, a man whose own love and loathing for his former commander mirrors the mixed emotions felt by all Athens, Tides of War tells an epic saga of an extraordinary century, a war that changed history, and a complex leader who seduced a nation.

Praise For Tides of War: A Novel…

“Pressfield’s battlefield scenes rank with the most convincing ever written.”—USA Today

“Pressfield serves up not just hair-raising battle scenes . . . but many moments of valor and cowardice, lust and bawdy humor. . . . Even more impressively, he delivers a nuanced portrait of ancient athens.”—Esquire

“Pressfield’s attention to historic detail is exquisite. . . . This novel will remain with the reader long after the final chapter is finished.”—Library Journal

“Astounding, historically accurate tale . . . Pressfield is a master storyteller, especially adept in his graphic and embracing descriptions of the land and naval battles, political intrigues and colorful personalities, which come together in an intense and credible portrait of war-torn Greece.”—Publishers Weekly

Steven Pressfield is author of the international bestseller Gates of Fire, an epic novel of the battle of Thermopylae, and The Legend of Bagger Vance. He lives in Los Angeles.
Loading...
or support indie stores by buying on