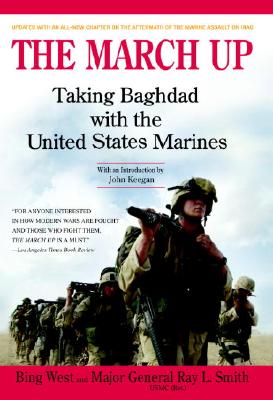 With unprecedented access and previously unreported detail, here is a first hand account of the 22-day march to Baghdad that takes you behind the scenes and to the front line...

No one reporting on the war in Iraq had the unique battlefield clearance afforded the authors of this dramatic eyewitness account. Unlike embedded journalists confined to a single unit, West and Smith acquired a captured yellow SUV and joined with whatever unit was leading the assault every day of the fight. The result is a report of what really happened from the heart of the action unlike anything you’ll read anywhere else.

“While we will move swiftly and aggressively against those who resist, we will treat all others with decency, demonstrating chivalry and soldierly compassion for people who have endured a lifetime under Saddam’s oppression.”—Major General J.N. Mattis, 1st Marine Division, Commanding

Here is the story that can be told only by those who actually witnessed the action of the famed 1st Marine Division’s march on Baghdad, from the shaky beginning of U.S. operations in southern Iraq to the capture of U.S. prisoners, the misreported “fierce Iraqi resistance,” and the aggressive assaults that led to a quick and decisive victory.

With over a half century of military and combat experience between them, bestselling author F. J. “Bing” West and Major General Ray L. Smith, USMC (Ret.), combine expert military analysis with dramatic battlefield reporting. They bring the reader on a march that ended in victory—but was shadowed by second-guessing, unexpected reversals, and the threat of catastrophe.


With access to three-star generals in the command centers and to privates in the field, the authors reveal how the strategic plan played out in battle, showing what went well and what failed, and detailing power struggles for military and political control never reported. The result is destined to become the definitive account of ground warfare in Iraq.

Praise For The March Up: Taking Baghdad with the United States Marines…

“Smith and West deliver a balanced and unblinking account that will certainly become one of the standard texts on the second Gulf War….As a result, this book is a sort of microscope-telescope hybrid, moving seamlessly through many levels: Here is the division commander's view of the fight, the regiment commander's view, the battalion commander's view, the company commander's view—and the corporal's view, slugging it out on the ground at the head of a fire team….The March Up should be required reading for everyone serving in the armed forces—and for anyone exercising policy influence over the institution they serve.”—Washington Post Book World

"It is one thing to know about Marines. It is another to know the sting of battle. To tell the true story of combat up close and personal, the authors must be there on the scene with the Marines in action ... That is exactly what the reader gets in The March Up.... An excellent look at Marine combat at its best in the 21st century."—Marine Corps Gazette

“This is the face of war as only those who have fought it can describe it.”—Senator John McCain

“This book will stand as the definitive account about the nature of ground combat as we enter the 21st century. A gripping and honest account of war as told by two distinguished veterans.”—James Schlesinger, former Secretary of Defense and former Director of Central Intelligence

“An important and unflinching chronicle of contemporary warfare. Regardless of one’s position on the war in Iraq—on any war—The March Up speaks with authority and legitimacy and cuts to the very bone to reveal the experience of the modern fighting infantryman.” —General Anthony C. Zinni, USMC (Ret.), former Commander in Chief, Central Command

F. J. “BING” WEST (right) served as Assistant Secretary of Defense for International Security Affairs in the Reagan administration. He was a Marine infantry officer in Vietnam, where he wrote Small Unit Action, a firsthand description of the combat. He is also the author of The Village, a Vietnam classic, and the bestselling war novel The Pepperdogs. Visit his website at www.westwrite.com.


MAJOR GENERAL RAY L. SMITH, USMC (Ret.), is one of the most decorated Marines since World War II and served as a rifle company commander in the battle for Hue City in 1968. He commanded the Marines in Grenada in 1983 and in Beirut. He later commanded the 3rd Marine Division. He is a national expert on infantry and urban warfare.
Loading...
or support indie stores by buying on
(This book is on backorder)