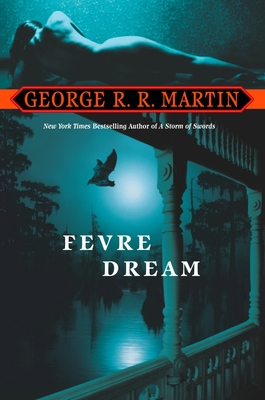 When struggling riverboat captain Abner Marsh receives an offer of partnership from a wealthy aristocrat, he suspects something’s amiss. But when he meets the hauntingly pale, steely-eyed Joshua York, he is certain. For York doesn’t care that the icy winter of 1857 has wiped out all but one of Marsh’s dilapidated fleet. Nor does he care that he won’t earn back his investment in a decade. York has his own reasons for wanting to traverse the powerful Mississippi. And they are to be none of Marsh’s concern—no matter how bizarre, arbitrary, or capricious his actions may prove.

Marsh meant to turn down York’s offer. It was too full of secrets that spelled danger. But the promise of both gold and a grand new boat that could make history crushed his resolve—coupled with the terrible force of York’s mesmerizing gaze. Not until the maiden voyage of his new sidewheeler Fevre Dream would Marsh realize he had joined a mission both more sinister, and perhaps more noble, than his most fantastic nightmare...and mankind’s most impossible dream.
Here is the spellbinding tale of a vampire’s quest to unite his race with humanity, of a garrulous riverman’s dream of immortality, and of the undying legends of the steamboat era and a majestic, ancient river.

Praise For Fevre Dream: A Novel…

“A novel that will delight fans of both Stephen King and Mark Twain . . . darkly romantic, chilling and rousing by turns . . . a thundering success.”—Roger Zelazny

“An adventure into the heart of darkness that transcends even the most inventive vampire novels . . . Fevre Dream runs red with original, high adventure.”—Los Angeles Herald Examiner

“Stands alongside Anne Rice’s Interview with the Vampire as a revolutionary work.”—Rocky Mountain News