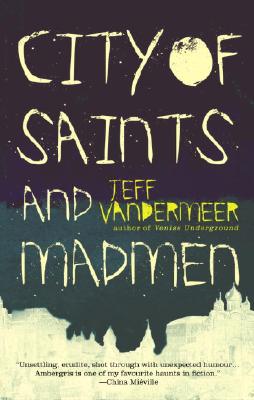 City of Saints and Madmen

In City of Saints and Madmen, Jeff VanderMeer has reinvented the literature of the fantastic. You hold in your hands an invitation to a place unlike any you ve ever visited an invitation delivered by one of our most audacious and astonishing literary magicians.
City of elegance and squalor. Of religious fervor and wanton lusts. And everywhere, on the walls of courtyards and churches, an incandescent fungus of mysterious and ominous origin. In Ambergris, a would-be suitor discovers that a sunlit street can become a killing ground in the blink of an eye. An artist receives an invitation to a beheading and finds himself enchanted. And a patient in a mental institution is convinced he's made up a city called Ambergris, imagined its every last detail, and that he's really from a place called Chicago.
By turns sensuous and terrifying, filled with exotica and eroticism, this interwoven collection of stories, histories, and eyewitness reports invokes a universe within a puzzlebox where you can lose and find yourself again.

Two-time World Fantasy Award winner Jeff VanderMeer has been a finalist for the Hugo Award, the Philip K. Dick Award, the International Horror Guild Award, the Bram Stoker Award, and many others. His recent books include Veniss Underground, the literary fantasy City of Saints & Madmen, and The Thackery T. Lambshead Pocket Guide to Eccentric & Discredited Diseases, which he co-edited. Books by VanderMeer have made the year's best lists of Amazon.com, Publishers Weekly, San Francisco Chronicle, Los Angeles Weekly, and Locus Magazine. He lives in Tallahassee, Florida, with his wife, Ann.
Loading...
or
Not Currently Available for Direct Purchase