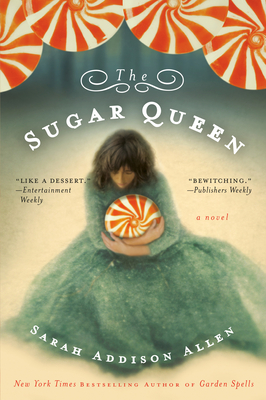 NEW YORK TIMES BESTSELLER • In this irresistible novel, Sarah Addison Allen, author of the bestselling debut, Garden Spells, tells the tale of a young woman whose family secrets—and secret passions—are about to change her life forever.

Josey Cirrini is sure of three things: winter is her favorite season, she’s a sorry excuse for a Southern belle, and sweets are best eaten in the privacy of her closet. For while Josey has settled into an uneventful life in her mother’s house, her one consolation is the stockpile of sugary treats and paperback romances she escapes to each night. . . . Until she finds her closet harboring Della Lee Baker, a local waitress who is one part nemesis—and two parts fairy godmother. With Della Lee’s tough love, Josey’s narrow existence quickly expands. She even bonds with Chloe Finley, a young woman who is hounded by books that inexplicably appear when she needs them—and who has a close connection to Josey’s longtime crush. Soon Josey is living in a world where the color red has startling powers, and passion can make eggs fry in their cartons. And that’s just for starters.

Brimming with warmth, wit, and a sprinkling of magic, here is a spellbinding tale of friendship, love—and the enchanting possibilities of every new day.

Praise for The Sugar Queen

“Bewitching . . . Such a pleasurable book.”—Publishers Weekly

Praise For The Sugar Queen: A Novel…

“Bewitching…. Such a pleasurable book.”—Publishers Weekly

Sarah Addison lives in Asheville, North Carolina, where she is at work on her next novel.

What keeps Josey from leaving home? What makes Adam stay in Bald Slope? In what ways do they feel the same about North Carolina and its landscape?

What has Josey hungered for throughout her life? What transformed her from a difficult child into a woman who hides her cravings?

Why does Margaret want to prevent the arrival of unexpected visitors? What fears are captured in her peppermint-oil ritual?

What are Julian’s motivations in his pursuit of Chloe? How did your opinion of him shift throughout the novel?

In her conversation with Livia’s granddaughter (chapter six), Josey suggests that Amelia might want to have a life of her own. Amelia immediately dismisses that idea. What enables Josey to free herself, rather than becoming like Amelia? Could Josey have done it without Della Lee?

How does money influence Josey’s outlook on life? How did her father use it, through lavish parties and an eye-catching house, to get what he wanted? What was he not able to buy, no matter how wealthy he was?

Josey lives in a world of rules, from a neighborhood that bans snowmen to a mother who bans a snug red sweater. What is the purpose of these rules? What stifling rules in your life–at work, with your family, or in your community–do you sometimes dream of breaking?

Discuss Chloe’s relationship to the world of books. What is the significance of the magical way they appear in her life, and the equally magical way she finds a house to call her own? How do books become a home for her?

What is Nova Berry’s role in Bald Slope? How do her remedies–such as stinging nettle tea–compare to Josey’s sweets?

How did Margaret’s past shape her future? Who ultimately is to blame for standing in the way of her love for Rawley? How have notions of love and motherhood changed for Josey’s generation?

How did you react when Della Lee’s situation was revealed in the end? Have you ever been guided by the wisdom of someone like her?

Would you have forgiven Jake? How did you feel about him after you learned the identity of his lover?

How are Adam and Josey able to heal each other as their attraction grows? What does it take to propel Josey’s crush beyond the realm of fantasy? When are they able to trust each other enough to have a real-world relationship?

What were your thoughts as Josey tore up the attorney’s note aboard the ship? What do you believe it said? Are secrets ever useful in a family, or do they always result in pain?