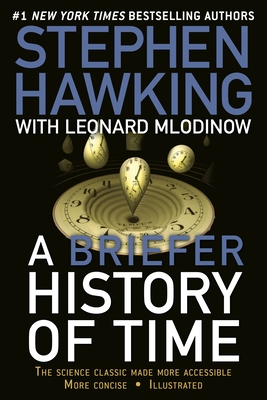 A Briefer History of Time

The Science Classic Made More Accessible

Stephen Hawking’s worldwide bestseller A Brief History of Time remains a landmark volume in scientific writing. But for years readers have asked for a more accessible formulation of its key concepts—the nature of space and time, the role of God in creation, and the history and future of the universe. A Briefer History of Time is Professor Hawking’s response.

Although “briefer,” this book is much more than a mere explanation of Hawking’s earlier work. A Briefer History of Time both clarifies and expands on the great subjects of the original, and records the latest developments in the field—from string theory to the search for a unified theory of all the forces of physics. Thirty-seven full-color illustrations enhance the text and make A Briefer History of Time an exhilarating and must-have addition in its own right to the great literature of science and ideas.


Praise For A Briefer History of Time: The Science Classic Made More Accessible…

“Hawking and Mlodinow provide one of the most lucid discussions of this complex topic ever written for a general audience. . . . [They] maintain the same wry, lively tone that made A Brief History of Time such a delight.”—Publishers Weekly, starred review

“May be the clearest introduction to physics ever . . . An utterly engrossing read.”—Booklist

Physicist Leonard Mlodinow, his collaborator for this new edition, has taught at Cal Tech, written for Star Trek: The Next Generation, and is the author of Euclid’s Window and Feynman’s Rainbow and the coauthor of the children’s book series The Kids of Einstein Elementary.
Loading...
or support indie stores by buying on
(This book is on backorder)