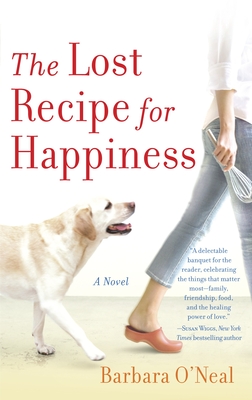 The Lost Recipe for Happiness (Paperback)

In this sumptuous novel, Barbara O’Neal offers readers a celebration of food, family, and love as a woman searches for the elusive ingredient we’re all hoping to find. . . .

It’s the opportunity Elena Alvarez has been waiting for—the challenge of running her own kitchen in a world-class restaurant. Haunted by an accident of which she was the lone survivor, Elena knows better than anyone how to survive the odds. With her faithful dog, Alvin, and her grandmother’s recipes, Elena arrives in Colorado to find a restaurant in as desperate need of a fresh start as she is—and a man whose passionate approach to food and life rivals her own. Owner Julian Liswood is a name many people know but a man few do. He’s come to Aspen with a troubled teenage daughter and a dream of the kind of stability and love only a family can provide. But for Elena, old ghosts don’t die quietly, yet a chance to find happiness at last is worth the risk.

Barbara O’Neal fell in love with food and restaurants at the age of fifteen, when she landed a job in a Greek café and served baklava for the first time. She sold her first novel in her twenties, and has also published under the names Barbara Samuel and Ruth Wind. Since then she has won a plethora of awards, including two Colorado Book Awards and six prestigious RITAs, including one for The Lost Recipe for Happiness. Her novels have been widely published in Europe and Australia, and she travels all over the world, presenting workshops, hiking hundreds of miles, and, of course, eating. She lives with her partner, a British endurance athlete, and their collection of cats and dogs, in Colorado Springs.


Praise For The Lost Recipe for Happiness: A Novel…

"As dark and deep and sweet as chocolate...I wanted to live in this book." —Sarah Addison Allen, New York Times bestselling author

What was your first impression of Elena as a character? What about Julian? How did your view of them change throughout the novel? In what ways did each of them surprise you?

Discuss the role of food and cooking in The Lost Recipe for Happiness. What did food mean to each of the characters? What meals left the strongest impression with you as a reader? What tastes were you reminded of? What do you think this added to the reading experience?

Consider the town of Aspen itself. It seems that each of the characters is there for a reason. What brings each of them to Aspen, and what keeps them there? Who do you think will stay, and who will eventually move on? Why is this a good setting for a book like this?

There are several secrets and betrayals in The Lost Recipe for Happiness. Was there any point where a secret, once revealed, shocked you? Were you surprised by any other character’s reaction to a revelation? How would you have reacted to each admission?

Why does Julian wait so long to disclose the truth about his screenplay to Elena? What does his reticence tell you about him?

Several times throughout the book, Elena and others discuss the three most memorable foods they’ve ever eaten. What are yours, and why?

Discuss the relationship between Patrick and Ivan. What do they see in each other? Do you think this is a relationship that will stand the test of time?

The Lost Recipe for Happiness is written mostly from Elena’s point of view, but we occasionally hear from the other characters as well. What did the chapters from Julian and Ivan’s perspective add to your understanding of the story?

As the child of an actress, Portia has some very real issues with her body image. Consider the argument she has with her father toward the end of Chapter 13. What did you think of her argument? Is it possible for an overweight woman to be truly successful? Is it easier for men in this sense?

Many of the characters in this novel have sustained some kind of damage–physical or emotional–from their childhood. In what ways does this manifest itself, and what does it take for each of them to move on?

Throughout The Lost Recipe for Happiness, there is discussion about the idea that each person has a soul mate. Do you think this is true in the world of this novel? What about in real life?

Elena carries some very real ghosts of her past along with her, as well as the metaphorical ghosts of her memories. How did you feel about the ghosts in the novel? What role did they play in Elena’s life? Do you think that Isobel will be back, or has she truly left Elena for good?