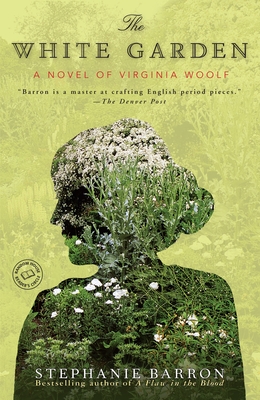 A Novel of Virginia Woolf

In March 1941, Virginia Woolf filled her pockets with stones and drowned herself in England’s River Ouse. Her body was found three weeks later. What seemed like a tragic ending at the time was, in fact, just the beginning of a mystery. . . .

Six decades after Virginia Woolf’s death, landscape designer Jo Bellamy has come to Sissinghurst Castle for two reasons: to study the celebrated White Garden created by Woolf’s lover Vita Sackville-West and to recover from the terrible wound of her grandfather’s unexplained suicide. In the shadow of one of England’s most famous castles, Jo makes a shocking find: Woolf’s last diary, its first entry dated the day after she allegedly killed herself.

If authenticated, Jo’s discovery could shatter everything historians believe about Woolf’s final hours. But when the Woolf diary is suddenly stolen, Jo’s quest to uncover the truth will lead her on a perilous journey into the tumultuous inner life of a literary icon whose connection to the White Garden ultimately proved devastating.

Rich with historical detail, The White Garden is an enthralling novel of literary suspense that explores the many ways the past haunts the present–and the dark secrets that lurk beneath the surface of the most carefully tended garden.

Praise For The White Garden: A Novel of Virginia Woolf…

“Barron is a master at crafting English period pieces.”—Denver Post

“The White Garden grows an intriguing tale, weaving together the tendrils of past and present, growth and corruption, love and despair, into a landscape of hope. This is a mystery in a garden: a garden in war; a garden beset by modernity; a ghostly white garden haunted by the dead.”  —Laurie R. King, author of The Language of Bees

“Stephanie Barron has concocted a delicious exploration of what could have happened to Virginia Woolf in the weeks between her disappearance and the day her body floated to the surface of the river Ouse. Part mystery, part a search for redemption, The White Garden will entrance readers from the moment they open it.”  —Tasha Alexander, author of And Only to Deceive

Stephanie Barron is the author of nine bestselling Jane Austen mysteries. She lives near Denver, Colorado.
Loading...
or
Not Currently Available for Direct Purchase