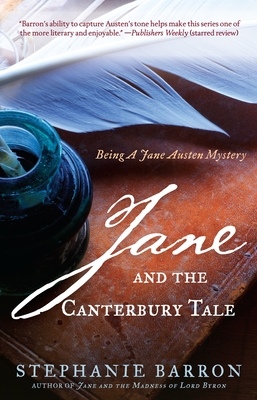 Jane and the Canterbury Tale

Being A Jane Austen Mystery

Three years after news of her scandalous husband’s death, Adelaide Fiske is at the altar again, her groom a soldier on the Marquis of Wellington’s staff. The prospects seem bright for one of the most notorious women in Kent—until Jane Austen discovers a corpse on the ancient Pilgrim’s Way that runs through her brother Edward’s estate. As First Magistrate for Canterbury, Edward is forced to investigate, with Jane as his reluctant assistant. But she rises to the challenge and leaves no stone unturned, discovering mysteries deeper than she could have anticipated. It seems that Adelaide’s previous husband has returned for the new couple’s nuptials—only this time, genuinely, profoundly dead. But when a second corpse appears beside the ancient Pilgrim’s Way, Jane has no choice but to confront a murderer, lest the next corpse be her own.

Praise For Jane and the Canterbury Tale: Being A Jane Austen Mystery…

Stephanie Barron’s beloved Being A Jane Austen Mystery series is . . .

“Wonderful . . . echoing the rhythms of the Austen novels with uncanny ease.”—Entertainment Weekly

Stephanie Barron is the author of the standalone historical suspense novels A Flaw in the Blood and The White Garden, as well as the Jane Austen mystery series. As Francine Mathews, she is the author of several novels of espionage, including The Alibi Club. She lives in Denver, Colorado.
Loading...
or
Not Currently Available for Direct Purchase