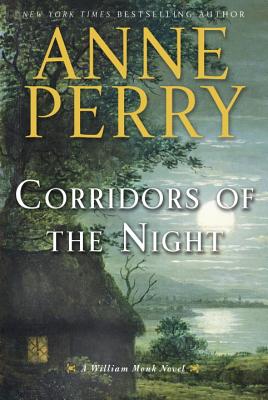 Corridors of the Night

Anne Perry, that incomparable novelist of life in Victorian England, has once again surpassed herself, with this twenty-first installment of her New York Times bestselling William Monk series. In Corridors of the Night, nurse Hester Monk and her husband, William, commander of the Thames River Police, do desperate battle with two obsessed scientists who in the name of healing have turned to homicide. The monomaniacal Rand brothers--Magnus, a cunning doctor, and Hamilton, a genius chemist--are ruthless in their pursuit of a cure for what was then known as the fatal "white-blood disease." In London's Royal Naval Hospital annex, Hester is tending one of the brothers' dying patients--wealthy Bryson Radnor--when she stumbles upon three weak, terrified young children, and learns to her horror that they've been secretly purchased and imprisoned by the Rands for experimental purposes. But the Rand brothers are too close to a miracle cure to allow their experiments to be exposed. Before Hester can reveal the truth, she too becomes a prisoner. As Monk and his faithful friends--distinguished lawyer Oliver Rathbone and reformed brothel keeper Squeaky Robinson among them--scour London's grimy streets and the beautiful English countryside searching for her, Hester's time, as well as the children's, is quickly draining away. Taut with intrigue and laced with white-knuckled terror, Corridors of the Night is Anne Perry at her magnificent, unforgettable best. Praise for Corridors of the Night

" A] suspenseful, twisting narrative."--Historical Novels Review "Anne Perry has once again evocatively and meticulously conjured up Victorian London. . . . This is one of her best as she continues probing . . . the dark impulses that haunt all human souls."--Providence Journal "Pulls no punches and depicts Victorian London in all its corrupt glory."--Bookreporter Praise for Anne Perry and Her William Monk novels

Blood on the Water

"One of Ms. Perry's most engrossing books . . . gallops to a dramatic conclusion."--The Washington Times

" Perry's] courtroom scenes have the realism of Scott Turow."--Huntington News

Execution Dock " An] engrossing page-turner . . . There's no one better at using words to paint a scene and then fill it with sounds and smells than Anne Perry."--The Boston Globe

Anne Perry is the bestselling author of two acclaimed series set in Victorian England: the William Monk novels, including Blood on the Water and Blind Justice, and the Charlotte and Thomas Pitt novels, including The Angel Court Affair and Death on Blackheath. She is also the author of a series of five World War I novels, as well as thirteen holiday novels, most recently A Christmas Escape, and a historical novel, The Sheen on the Silk, set in the Ottoman Empire. Anne Perry lives in Scotland and Los Angeles.
Loading...
or
Not Currently Available for Direct Purchase