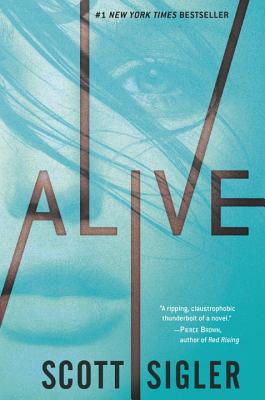 #1 NEW YORK TIMES BESTSELLER - For fans of The Hunger Games, Divergent, and Red Rising comes a gripping sci-fi adventure in which a group of teenagers wake up in a mysterious corridor with no knowledge of who they are or how they got trapped. Their only hope lies with an indomitable young woman who must lead them not only to answers but to survival.

"I open my eyes to darkness. Total darkness. I hear my own breathing, but nothing else. I lift my head . . . it thumps against something solid and unmoving. There is a board right in front of my face. No, not a board . . . a lid."

A teenage girl awakens to find herself trapped in a coffin. She has no idea who she is, where she is, or how she got there. Fighting her way free brings little relief--she discovers only a room lined with caskets and a handful of equally mystified survivors. Beyond their room lies a corridor filled with bones and dust, but no people . . . and no answers. She knows only one thing about herself--her name, M. Savage, which was engraved on the foot of her coffin--yet she finds herself in charge. She is not the biggest among them, or the boldest, but for some reason the others trust her. Now, if they're to have any chance, she must get them to trust one another. Whatever the truth is, she is determined to find it and confront it. If she has to lead, she will make sure they survive. Maybe there's a way out, a rational explanation, and a fighting chance against the dangers to come. Or maybe a reality they cannot comprehend lies just beyond the next turn. Praise for Alive

"Suspenseful . . . Alive] lives up to its hype, packing plenty of thrills."--Entertainment Weekly

"Fascinating and intriguing . . . a cross between Lord of the Flies and The Maze Runner and yet . . . so much more."--Fresh Fiction "A ripping, claustrophobic thunderbolt of a novel, Scott Sigler's Alive gives us an unforgettable young hero who must find the inner strength to lead without knowing where she is, who she is, and how bitterly the odds are stacked against her."--Pierce Brown, New York Times bestselling author of Red Rising

"Sigler has created a wonderful and engrossing character in M. Savage. Strong and smart, but with the naivete and misgivings of any teenage girl, she's someone you'll definitely want on your side when s*** hits the fan, which it most certainly does."--Veronica Belmont, host of Sword & Laser "A tense, unsettling page-turner of a story--both deeply strange and wildly compelling."--Cherie Priest, author of Boneshaker and Maplecroft "From the first page I was hooked. The puzzle unfolds masterfully, right down to the last page."--Dr. Phil Plait, author of Bad Astronomy

Scott Sigler is the New York Times bestselling author of sixteen novels--including Alive and Alight--six novellas, and dozens of short stories. He is also the co-founder of Empty Set Entertainment, which publishes his YA Galactic Football League series. He lives in San Diego.
Loading...
or
Not Currently Available for Direct Purchase