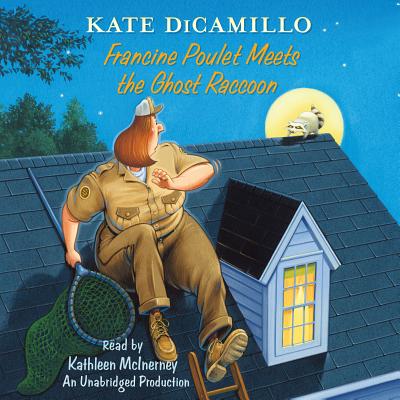 Deckawoo Drive’s intrepid Animal Control Officer meets her match—or does she? A funny, heartfelt, and fast-paced romp from the National Ambassador for Young People’s Literature.

Francine Poulet is the greatest Animal Control Officer in Gizzford County. She hails from a long line of Animal Control Officers. She’s battled snakes, outwitted squirrels, and stared down a bear. "The genuine article," Francine’s dad always called her. She is never scared—until, that is, she’s faced with a screaming raccoon that may or may not be a ghost. Maybe Francine isn’t cut out to be an Animal Control Officer after all! But the raccoon is still on the loose, and the folks on Deckawoo Drive need Francine back. Can she face her fears, round up the raccoon, and return to the ranks of Animal Control? Join a cast of familiar characters—Frank, Stella, Mrs. Watson, and Mercy the porcine wonder—for some riotous raccoon wrangling on Deckawoo Drive.

Kate DiCamillo is the beloved author of many books for young readers, including six books about Mercy Watson as well as the Deckawoo Drive spin-off series, and Flora & Ulysses: The Illuminated Adventures and The Tale of Despereaux, both of which won Newbery Medals. In 2014, she was named National Ambassador for Young People's Literature. She lives in Minneapolis.
Loading...
or
Not Currently Available for Direct Purchase