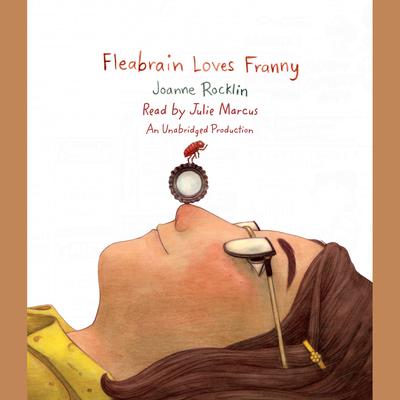 This gem of a novel takes place in Pittsburgh in 1952. Franny Katzenback, while recovering from polio, reads and falls in love with the brand-new book Charlotte’s Web. Bored and lonely and yearning for a Charlotte of her own, Franny starts up a correspondence with an eloquent flea named Fleabrain who lives on her dog’s tail. While Franny struggles with physical therapy and feeling left out of her formerly active neighborhood life, Fleabrain is there to take her on adventures based on his extensive reading. It’s a touching, funny story set in the recent past, told with Rocklin’s signature wit and thoughtfulness.

JOANNE ROCKLIN's middle grade novel, THE FIVE LIVES OF OUR CAT ZOOK, won the 2013 Golden Kite Award for Fiction given by the Society of Children's Book Writers and Illustrators. It is also published as an audiobook. "The only imperfection in this novel is that it ends." BOOKLIST, starred. It is a Parents' Choice Gold Award winner.

She is also the critically acclaimed author of several other books, including ONE DAY AND ONE AMAZING MORNING ON ORANGE STREET, which won the California Library Association's Beatty Award, the FOCAL Award of the Los Angeles Public Library, and the California Book Award Gold Medal from the Commonwealth Club. It was also voted best middle grade by the Northern California Independent Booksellers Association. STRUDEL STORIES was a School Library Journal Best Book of the Year and an American Library Association Notable Book, and FOR YOUR EYES ONLY!, was a School Library Journal Best Book and a Bank Street Best Book. Her early readers THREE SMART PALS and THIS BOOK IS HAUNTED will soon be e-books, the latter also to be released as an App.

She has a doctorate in psychology and is a former elementary school teacher, presently writing children's books full-time. For several years she taught a popular class in writing children's books at UCLA Extension. She gives presentations in schools, libraries and bookstores and has been a speaker for the Society of Children's Book Writers and Illustrators, the California Reading Association, and other organizations.

Originally from Montreal, Canada, Joanne lived in Los Angeles for many decades. She now lives in Oakland, California.