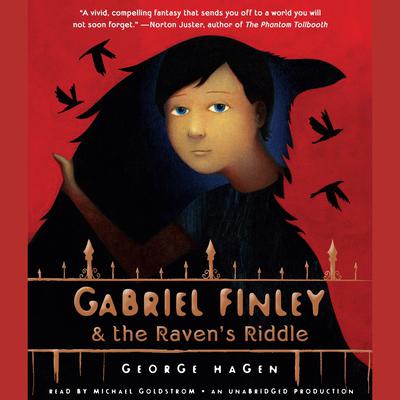 A tangle of ingenious riddles, a malevolent necklace called a torc, and flocks of menacing birds: these are just some of the obstacles that stand between Gabriel and his father, Adam Finley, who has vanished from their Brooklyn brownstone. When Gabriel rescues an orphaned baby raven named Paladin, he discovers a family secret: Finleys can bond with ravens in extraordinary ways. Along with Paladin and three valiant friends, Gabriel sets out to bring his father home. They soon discover that Adam is being held captive by the evil demon Corax—half man, half raven, and Adam’s very own disgraced brother—in a foreboding netherworld of birds called Aviopolis. With help from his army of ghoulish minions, the valravens, Corax is plotting to take over the land above, and now only Gabriel stands in his way.

“A vivid, compelling fantasy that sends you off to a world you will not soon forget.” —Norton Juster, author of The Phantom Tollbooth

“A great read for fantasy lovers who have worn out their copies of Harry Potter.” —School Library Journal, Starred

“Brimful of antic energy and inventive flair, like the best middle-grade fantasies; readers, like baby birds, will devour it and clamor for future installments.” —Kirkus Reviews

George Hagen is the author of two novels for adults: The Laments, a Washington Post bestseller and recipient of the William Saroyan International Prize for writing, which Publishers Weekly called “a funny, touching novel about the meaning of family;” and Tom Bedlam, which was described by Booklist as “Dickensian in scope and spirit. . . . Shot through with humor, and populated with a cast of eccentric charmers.”

George had lived on three continents by the time he was twelve. The father of three children, he now lives in Brooklyn, New York. This is his first book for kids. To learn more about the author, visit georgehagen.com.