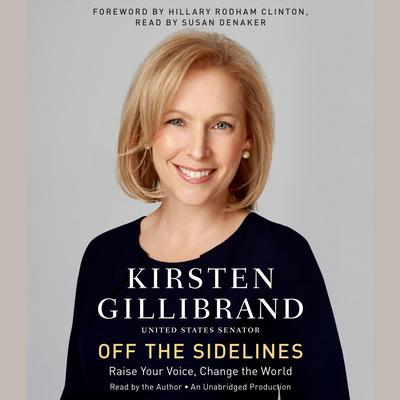 Off the Sidelines (Digital Audiobook)

A magna cum laude graduate of Dartmouth College in 1988, Senator Kirsten Gillibrand went on to receive her law degree from the UCLA School of Law in 1991 and served as a law clerk on the Second Circuit Court of Appeals. After working as an attorney in New York City for nearly a decade, Gillibrand served as special counsel to Secretary of Housing and Urban Development Andrew Cuomo during the Clinton administration, then as an attorney before serving in the U.S. House of Representatives, representing New York’s 20th Congressional District, which spans ten counties in upstate New York. Gillibrand was first sworn in as United States senator from New York in January 2009, filling Hillary Rodham Clinton’s seat. In November 2012 she was elected to her first six-year Senate term with 72 percent of the vote, a New York State record, winning sixty of New York’s sixty-two counties. She lives in Troy, New York, with her husband, Jonathan, and their sons, Theo and Henry.