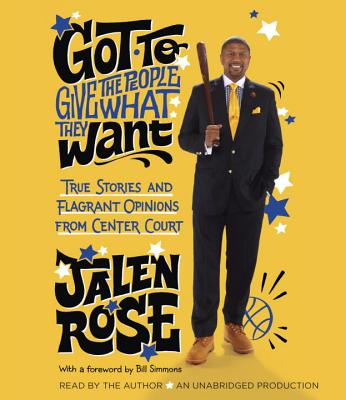 Got to Give the People What They Want

"I want to start conversations, and even better, arguments." - From the Introduction

One of the most outspoken and original voices in sports sounds off while revealing his incredible life story.

Jalen Rose has never been quiet. Not as a kid growing up in Detroit in the 70's and 80's. Not as the brash, trash-talking leader of the legendary "Fab Five" at the University of Michigan. Not as the player under the stewardship of Hall of Famers Larry Bird, Isiah Thomas and others throughout his 13-year NBA career. And certainly not as a commentator and analyst on ABC/ESPN and Grantland. In Got to Give the People What They Want, no topic is off limits. Honest, unfiltered, unbiased. Raw, refreshing, real. This colorful collection of stories and opinions about basketball and life gives people the kind of insight and understanding they don't get anywhere else in the sports world.

JALEN ROSE is an ABC/ESPN analyst, executive producer of The Fab Five--the highest-rated documentary in ESPN history--and host of the Jalen Rose Report on Grantland and the Jacoby Podcast. Rose began his sports career at the University of Michigan where he reached two NCAA title games, and then went on to play for six teams in the NBA, most notably the Indiana Pacers when they made three consecutive Eastern Conference finals, including the 2000 NBA Finals. Rose established the Jalen Rose Foundation/Charitable Fund in 2000, personally donating close to $1.5 million to support the development and education of inner-city youths. His most substantial outreach initiative to date is the establishment of the Jalen Rose Leadership Academy (JRLA) in his hometown of Detroit. From the Hardcover edition.
Loading...
or
Not Currently Available for Direct Purchase