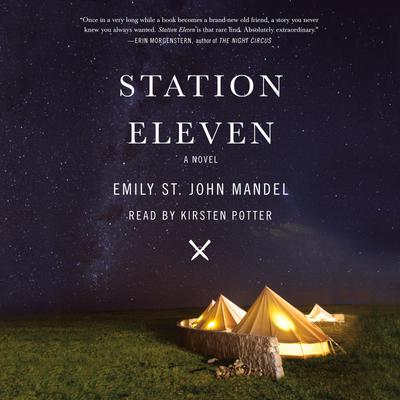 “This is a harrowing and wonderful book -- blunt and elegant, wise and frightening, and utterly plausible at every turn. The characters are complicated, but their stories, short or long, are always deeply engaging. We -- our species -- always find ways, little by little, not just to survive but also to reestablish a sense of place, of community, and of compassion. Unsentimental yet deeply moving, Station Eleven is a terrific achievement.”
— John Christensen, Arcadia Books, Spring Green, WI
View the List

NATIONAL BESTSELLER • An audacious, darkly glittering novel set in the eerie days of civilization’s collapse—the spellbinding story of a Hollywood star, his would-be savior, and a nomadic group of actors roaming the scattered outposts of the Great Lakes region, risking everything for art and humanity. Now an original series on HBO Max. Over one million copies sold!

Kirsten Raymonde will never forget the night Arthur Leander, the famous Hollywood actor, had a heart attack on stage during a production of King Lear. That was the night when a devastating flu pandemic arrived in the city, and within weeks, civilization as we know it came to an end.

Twenty years later, Kirsten moves between the settlements of the altered world with a small troupe of actors and musicians. They call themselves The Traveling Symphony, and they have dedicated themselves to keeping the remnants of art and humanity alive. But when they arrive in St. Deborah by the Water, they encounter a violent prophet who will threaten the tiny band’s existence. And as the story takes off, moving back and forth in time, and vividly depicting life before and after the pandemic, the strange twist of fate that connects them all will be revealed.

EMILY ST. JOHN MANDEL was born in British Columbia, Canada. She is the author of three previous novels-Last Night in Montreal, The Singer's Gun, and The Lola Quartet-all of which were Indie Next picks. She is a staff writer for The Millions, and her work has appeared in numerous anthologies, including The Best American Mystery Stories 2013 and Venice Noir. She lives in New York City with her husband.