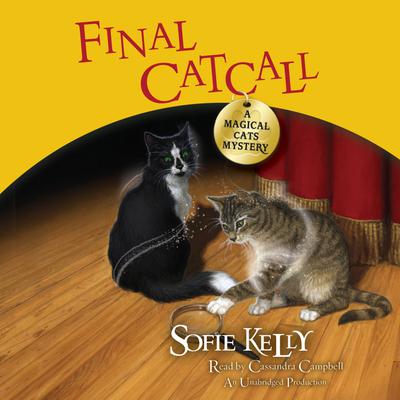 Small-town librarian Kathleen Paulson gets plenty of entertainment from her extraordinary cats, Owen and Hercules. But when a theater troupe stumbles into more tragedy than it bargained for, it’s up to Kathleen to play detective....

With her sort-of boyfriend Marcus calling it quits and her ex-boyfriend Andrew showing up out of the blue, Kathleen has more than enough drama to deal with—and that’s before a local theater festival relocates to Mayville Heights. Now the town is buzzing with theatre folk, and many of them have their own private dramas with the director, Hugh Davis.

When Davis is found shot to death by the marina, he leaves behind evidence of blackmail and fraud, as well as an ensemble of suspects. Now Kathleen, with a little help from her feline friends Owen and Hercules, will have to catch the real killer before another victim takes a final curtain call.

Sofie Kelly is the New York Times bestselling author of the Magical Cats mysteries. She lives on the East Coast.