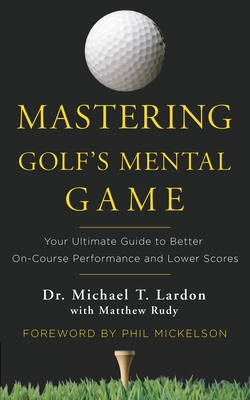 Perfect your mental approach to your game

To be a golfer is to tinker—with everything from equipment to grip to swing. But one thing most players don’t give enough attention to is the mental game. Psychologists aren’t a new phenomenon in golf, but Dr. Michael Lardon is a different breed of performance coach. Instead of sending his players into a losing battle against emotion, indecision, and fear on the golf course, he shows them how to organize their thoughts and use them for maximum performance. His step-by-step Pre-Shot Pyramid provides any player with the ideal blueprint for shot setup. And his revolutionary Mental Scorecard will give you the tools to accurately measure what you really do on the golf course and how to make real, permanent improvements.
You will learn the same techniques that Dr. Lardon shares with Phil Mickelson and dozens of other tour players, including the tools that helped Mickelson right himself after the 2012 U.S. Open to win the British Open a month later with a historic final round. Mastering Golf’s Mental Game will change the way you think about golf, and is a must-read for any player serious about shooting better scores and getting more enjoyment out of the game.

DR. MICHAEL T. LARDON is an associate clinical professor of medicine at the University of California, San Diego and a consulting psychiatrist to the United States Olympic teams at the Olympic Training Center in Chula Vista, California. His clients have won major championships, Olympic gold medals, Super Bowls, and World Series titles. He lives with his wife and three children outside San Diego.
Loading...
or support indie stores by buying on