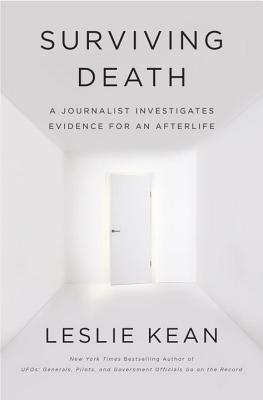 A Journalist Investigates Evidence for an Afterlife

“While exploring the evidence for an afterlife, I witnessed some unbelievable things that are not supposed to be possible in our material world. Yet they were unavoidably and undeniably real. Despite my initial doubt, I came to realize that there are still aspects of Nature which are neither understood or accepted, even though their reality has profound implications for understanding the true breadth of the human psyche and its possible continuity after death.”

Kean explores the most compelling case studies of young children reporting verifiable details from past lives, contemporary mediums who seem to defy the boundaries of the brain and of the physical world, apparitions providing information about their lives on earth, and people who die and then come back to report journeys into another dimension. Based on facts and scientific studies, Surviving Death includes fascinating chapters by medical doctors, psychiatrists, and PhDs from four countries.

As a seasoned journalist whose work transcends belief systems and ideology, Kean enriches the narrative by including her own unexpected, confounding experiences encountered while she probed the question concerning all of us: Do we survive death?

Praise For Surviving Death: A Journalist Investigates Evidence for an Afterlife…

"Astounding! With her usual scientific precision and insatiable curiosity, Leslie Kean is our Orpheus, descending into the Netherworld to grapple with the most ancient of mysteries and return with inspiring evidence -- death shall have no dominion." —Ralph Blumenthal, investigative reporter, author of Miracle at Sing Sing

"With a keen eye and a no-nonsense approach, investigative journalist Leslie Kean explores what the actual data tells us about the question of survival past death. Examining many phenomena and case studies with penetrating depth and insight, Kean lets the evidence speak for itself. She takes us on an engaging, personal, and transformative journey that challenges the skeptic and informs us all." —Harold E. Puthoff, Ph.D., Director of the Institute for Advanced Studies at Austin

"Surviving Death is a thoughtful and at times startling exploration of the afterlife. As a skeptical journalist, Leslie Kean is uniquely equipped to examine and evaluate the evidence for survival of consciousness. After encountering a rash of impossible facts and startling personal experiences, her conclusion is unequivocal: We are woefully ignorant of what happens after death, but it is very likely that something interesting happens rather than nothing. A refreshingly careful and candid review." —Dean Radin, PhD, author of Supernormal and The Conscious Universe

"In addressing the most important question facing all of us, Kean has synthesized data from both a wide variety of credible sources and from her own exploration of seemingly unexplainable personal observations. After decades of research into this topic, I believe the preponderance of the evidence indicates that we survive death. But far more important is that I urge everyone to read Surviving Death, engage in their own quest, and decide for themselves." —John B. Alexander, PhD, Colonel USA Ret., author of Future War and UFOs: Myths, Conspiracies, and Realities

"What a wonderful-and clarifying-opportunity to have someone with the reportorial skills and integrity of Leslie Kean explore the trouble-fraught subject of life after death. A quiet revolution is brewing today in the intellectual treatment of paranormal topics; Kean and this book are at the center of it." —Mitch Horowitz, PEN Award-winning author of Occult America and One Simple Idea

LESLIE KEAN is the New York Times bestselling author of UFOs: Generals, Pilots, and Government Officials Go on the Record (Crown Archetype, 2010). An independent investigative journalist, she has been published widely in dozens of newspapers and magazines here and abroad, such as the Boston Globe, The Nation, the Globe and Mail, and the International Herald Tribune, and currently contributes articles to the Huffington Post. Kean is also the coauthor of Burma’s Revolution of the Spirit. She lives in New York.
or
Not Currently Available for Direct Purchase