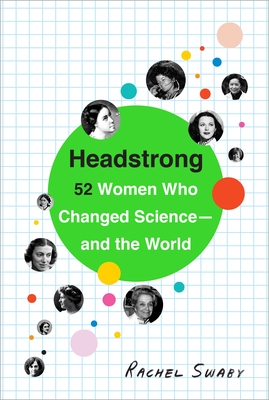 Headstrong delivers a powerful, global, and engaging response. Covering Nobel Prize winners and major innovators, as well as lesser-known but hugely significant scientists who influence our every day, Rachel Swaby’s vibrant profiles span centuries of courageous thinkers and illustrate how each one’s ideas developed, from their first moment of scientific engagement through the research and discovery for which they’re best known. This fascinating tour reveals 52 women at their best—while encouraging and inspiring a new generation of girls to put on their lab coats.


Praise For Headstrong: 52 Women Who Changed Science-and the World…

“Swaby tells the scientists’ stories with energy and clarity. Refreshingly, spouses and children are mentioned only when relevant—and the book is recipe-free.”
—New York Times Book Review

“[A] collection of brisk, bright biographies.”
—The Washington Post

"A woman revolutionized heart surgery. A woman created the standard test given to all newborns to determine their health. A woman was responsible for some of the earliest treatments of previously terminal cancers. We shouldn't need to be reminded of their names, but we do. With a deft touch, Rachel Swaby has assembled an inspiring collection of some of the central figures in twentieth century science. Headstrong is an eye-opening, much-needed exploration of the names history would do well to remember, and Swaby is a masterful guide through their stories."
—Maria Konnikova, Contributing New Yorker writer and New York Times bestselling author of Mastermind: How to Think Like Sherlock Holmes

“Rachel Swaby's fine, smart look at women in science is a much-needed corrective to the record—a deftly balanced field guide to the overlooked (Hilde Mangold), the marginalized (Rosalind Franklin), the unexpected (Hedy Lamarr), the pioneering (Ada Lovelace), and the still-controversial (Rachel Carson). Swaby reminds us that science, like the rest of life, is a team sport played by both genders.”
—William Souder, author of On a Farther Shore and Under a Wild Sky

"Headstrong is a true gem. So many amazing women have had an incredible impact on STEM fields, and this book gives clear, concise, easy-to-digest histories of 52 of them—there’s no longer an excuse for not being familiar with our math and science heroines. Thank you, Rachel!"
—Danica McKellar, actress and New York Times bestselling author of Math Doesn’t Suck

“Swaby’s exuberant portrayals make this a compulsively readable title. There is no good reason why every single woman here is not a household name, and now, thankfully, Swaby is helping rectify history’s oversight.”
—Booklist

“Swaby celebrates barrier-breaking titans… [and] has collected an inspiration master list of women in science with accessible explanations of their work.”
—Publishers Weekly

“Although many of these women may not be familiar names outside their courses of study, the author's spadework should bring them to the forefront, allowing the general public to learn about the females who pushed beyond sexist attitudes to undertake and achieve success in a male-dominated arena. These short accounts should inspire girls who want to study science to follow their dreams….succinct and informative.”
—Kirkus Reviews

"[W]omen just don’t get the encouragement they need and deserve to pursue careers in science. Here’s a handy book to help encourage young women to put themselves on the scitech path, with profiles of 52 women from Nobel Prize winners to major innovators and more who have made a difference in science."
—Library Journal

www.rachelswaby.com
Loading...
or support indie stores by buying on