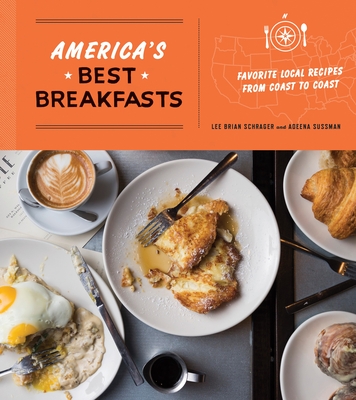 Favorite Local Recipes from Coast to Coast: A Cookbook

Rise and dine! If there’s one meal of the day to get passionate about—no matter where you’re from in this great land—it’s breakfast with all the fixings.

Featuring down-home diners, iconic establishments, and the newest local hot spots, America’s Best Breakfasts is a celebration of two of this nation’s honored traditions: hitting the open road and enjoying an endless variety of breakfasts. Even without a road trip, you can re-create favorites that will satisfy any time of day, including:

"Biscuits, grits, and migas all appear in this ode to great restaurant morning meals." —Entertainment Weekly

"I made the mistake of reading America's Best Breakfasts early one morning. The temptation was to board the subway and go straight to Russ & Daughters Cafe on Orchard Street. The book includes their recipe for potato latkes along with an appetizing photograph of the crisp latkes together with small bowl of pink salmon caviar pearls and creme fraiche. Indeed, I'm growing despondent with hunger just writing about the dish." —Ralph Gardner, Jr., The Wall Street Journal

"America's Best Breakfasts features the charming back stories of and recipes from some of the hottest and most iconic diners and eateries across the country." —InStyle

"Part guidebook, part cookbook, this tome highlights the best spots nationwide to indulge in the most important meal of the day." —New York Post

"Recipes, like for lobster scramble eggs from Connie and Ted's in West Hollywood, California, give practical advice for bringing the dishes from page to table." —Miami Herald

"They don't call it the most important meal of the day for nothing. This gorgeous book celebrates how our country wakes up—from shrimp and grits in Charleston, South Carolina, to croque monsieur sandwiches at San Francisco's Tartine bakery."  —PureWow

"These books make you want to eat your way through the land of the free . . . Chefs are embracing the art of breakfast, and food festival founder Lee Schrager and writer Adeena Sussman tour the country for America's Best Breakfasts, detailing regional specialities and local hot spots." —Tasting Table

"Make the best breakfasts from diners and eateries all over the United States without the hassle of a road trip." —Chowhound

"America’s Best Breakfasts was a huge success, you could tell by how tight my pants felt post morning session. I can only imagine if there were full size portions... I look forward to seeing what Lee Schrager does next!" —Little Moments of Happiness

LEE BRIAN SCHRAGER is the founder and director of the Food Network & Cooking Channel South Beach and New York City Wine & Food Festivals. He is also the vice president of corporate communications and national events at Southern Wine & Spirits of America and the author of Fried and True and The Food Network South Beach Wine & Food Festival Cookbook. A graduate of the Culinary Institute of America, Lee has appeared on Today and Rachael Ray, and serves on the board of directors for the Food Bank of New York City. He lives in Miami and New York City.

ADEENA SUSSMAN is a cookbook writer and recipe authority. In addition to this book she also collaborated with Lee Schrager on Fried and True, and is the coauthor of many other cookbooks. Her work has also been published in Food & Wine, The Wall Street Journal, Martha Stewart Living, Every Day with Rachael Ray, and on Epicurious and Food Republic.
Loading...
or
Not Currently Available for Direct Purchase