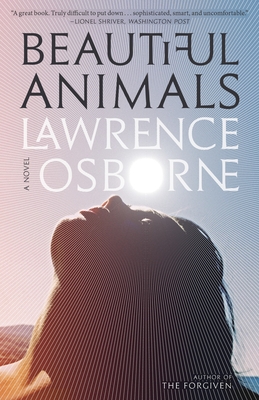 "Let’s not mince words. This is a great book. Truly difficult to put down... sophisticated, smart and uncomfortable, and the story is cracking." – Lionel Shriver, Washington Post

"Startlingly good...Osborne has been described as an heir to Graham Greene, and he shares with Greene an interest in what might be called the moral thriller.” – Katie Kitamura, New York Times Book Review

On a hike during a white-hot summer break on the Greek island of Hydra, Naomi and Samantha make a startling discovery: a man named Faoud, sleeping heavily, exposed to the elements, but still alive. Naomi, the daughter of a wealthy British art collector who has owned a villa in the exclusive hills for decades, convinces Sam, a younger American girl on vacation with her family, to help this stranger. As the two women learn more about the man, a migrant from Syria and a casualty of the crisis raging across the Aegean Sea, their own burgeoning friendship intensifies. But when their seemingly simple plan to help Faoud unravels all must face the horrific consequences they have set in motion.

In this brilliant psychological study of manipulation and greed, Lawrence Osborne explores the dark heart of friendship, and shows just how often the road to hell is paved with the best of intentions.

LAWRENCE OSBORNE is the author of the critically acclaimed novels The Forgiven, The Ballad of a Small Player, and Hunters in the Dark, and of six books of nonfiction. His short story "Volcano" was selected for The Best American Short Stories 2012, and he has written for The New York Times Magazine, The New Yorker, Condé Nast Traveler, Forbes, Harper's, and other publications. He lives in Bangkok.

Praise For Beautiful Animals: A Novel…

"[A] startlingly good observer of privilege, noting the rites and rituals of the upper classes with unerring precision and an undercurrent of malice… Osborne has been described as an heir to Graham Greene, and he shares with Greene an interest in what might be called the moral thriller.” – Katie Kitamura, New York Times Book Review

"Let’s not mince words. This is a great book. Truly difficult to put down, the novel exerts a sickening pull. Its climax and resolution will not disappoint. The social perspective is sophisticated, smart and uncomfortable, and the story is cracking." – Lionel Shriver, Washington Post

"The appeal of Osborne's nomadic fiction is that it cannot be easily placed in the contemporary British literary scene. His distinguished palette includes the big yearning of Scott Fitzgerald and the decadent hedonism of Charles Baudelaire. Most impressive of all, and there is much to be impressed by, Osborne handles surface and depth with immense skill, as only great writers do. Beautiful Animals is his most accomplished book so far – a big, clever, crazed beast of a novel." – Deborah Levy, Financial Times

"A seductively menacing new thriller by Lawrence Osborne... who unites Graham Greene’s fondness for foreign soil with Patricia Highsmith’s fascination with the nastier coils of the human psyche... What makes Osborne’s work so compelling is that it’s ruthlessly unpredictable. This is one writer who knows that life, even on a rapturously lovely Greek island, is no day at the beach.” –NPR’s “Fresh Air”

“A sun-drenched summer novel with a shadow of death hanging over it.” — NPR's "All Things Considered"

"As a thriller, a real page-turner, and as social commentary an astutely glancing approach to Europe's migration crisis. Rivetingly well written. Osborne...has a fine feel for the complexities of culture clash." – Financial Times (Summer Picks 2017)

“Beautiful Animals is terrifically well constructed, written with mean authority, brilliantly evocative about place, successfully engaging us with its characters without ever requiring us to like them. A masterpiece of disaffection, all round.” – Evening Standard (London)

“Beautifully crafted and psychologically astute, Osborne's latest novel takes us on another journey through a heart of moral darkness. A rich, disturbing, and compelling read."–  Kirkus (starred review)

“Osborne’s writing is uncomfortably well observed; his story is sickeningly, addictively headlong” – Lionel Shriver, author of We Need to Talk about Kevin

“If the purpose of a novel is to take you away from the everyday and show you something different, then Osborne is succeeding, and handsomely” – Lee Child, New York Times Book Review

“Mr. Osborne has a keen and sometimes cruel eye for humans and their manners and morals… Surprising and dark and excellent” – New York Times

“Elegant, stylish… edgy and gripping. Written with unfailing precision and beauty” – Neel Mukherjee, Man Booker Prize-shortlisted author of The Lives of Others