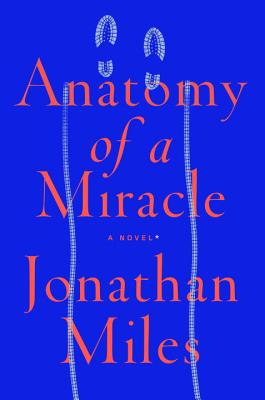 "Miles is a writer so virtuosic that readers will feel themselves becoming better, more observant people from reading him."
— Los Angeles Review of Books

A profound new novel about a paralyzed young man’s unexplainable recovery—a stunning exploration of faith, science, mystery, and the meaning of life

Rendered paraplegic after a traumatic event four years ago, Cameron Harris has been living his new existence alongside his sister, Tanya, in their battered Biloxi, Mississippi neighborhood where only half the houses made it through Katrina. One stiflingly hot August afternoon, as Cameron sits waiting for Tanya during their daily run to the Biz-E-Bee convenience store, he suddenly and inexplicably rises up and out of his wheelchair.

In the aftermath of this “miracle,” Cameron finds himself a celebrity at the center of a contentious debate about what’s taken place. And when scientists, journalists, and a Vatican investigator start digging, Cameron’s deepest secrets—the key to his injury, to his identity, and, in some eyes, to the nature of his recovery—become increasingly endangered. Was Cameron’s recovery a genuine miracle, or a medical breakthrough? And, finding himself transformed into a symbol, how can he hope to retain his humanity?

Brilliantly written as closely observed journalistic reportage and filtered through a wide lens that encompasses the vibrant characters affected by Cameron’s story, Anatomy of a Miracle will be read, championed, and celebrated as a powerful story of our time, and the work of a true literary master.

Praise For Anatomy of a Miracle: A Novel*…

Praise for Anatomy of a Miracle

"Jonathan Miles's masterful new novel Anatomy of a Miracle documents the slo-mo explosion of an attention-grabbing event with trompe l'oeil flourishes...Miles is a writer so virtuosic that readers will feel themselves becoming better, more observant people from reading him... Part of why Anatomy feels so expansive is that Miles takes every opportunity to delve into the characters' backstories... but this keen interest in people is part and parcel of a book in which the author describes humans as 'extraordinary' at least three times. In Miles's world, everyone — not just the people shouting loudest on the internet — is worthy of attention."
— Los Angeles Review of Books

"The impossible happens in... Jonathan Miles's latest novel, Anatomy of a Miracle. But it's what occurs before the astonishing event and what unspools after that will break open hearts and imaginations... Miles's powerful prose nudges readers to seek the soft spots between faith and judgment, story and science, and fact and fiction."
— CJ Lotz, Garden & Gun

"Anatomy of a Miracle by Jonathan Miles is a novel that reads like a true story. It's about a US veteran whose paralysis from the War in Afghanistan is miraculously cured. Cue a media frenzy and you finishing this story in days."
— TheSkimm

“[Anatomy of a Miracle] is a remarkable combination of medical mystery, satire and war story. Like Ben Fountain's Billy Lynn's Long Halftime Walk, it captures the long-lasting effects of war by focusing on those for whom war is only a tangential thing somewhere far away.”
— Shelf Awareness

“Jonathan Miles’ smart exploration of everything from the excesses of American popular culture to the deepest aspects of religious belief roars to life... A vivid portrait of our need to believe and its unintended consequences... Anatomy of a Miracle is a thoughtful modern morality play that’s as current as the latest internet meme and as timeless as the foundations of faith”
— BookPage

"Miles possesses a rare and admirable command of structure and style, shifting smoothly from Afghan patrol tactics to Catholic doctrine to neurological science; his sentences are thick with data, wittily delivered. … An expertly shaped tale about faith in collision with contemporary American culture.”
— Kirkus (starred review)

"Vibrant, bustling, and humorous... Cleverly shaped as a journalistic report, and told in a style similar to that of John Jeremiah Sullivan and Ron Currie, Miles' tale offers a nuanced and endlessly entertaining exploration of the age-old debate between faith and reason."
— Booklist

“With sincerity and wit, Miles pens a strong, sardonic rumination on the religious boundaries of the miraculous.”
— Library Journal

“Jonathan Miles has written a novel whose comic moments alone make it a wonderful read, but Anatomy of a Miracle quickly becomes so much more: an intense, and intensely profound, meditation on how an extraordinary event might test the limits of both scientific and religious belief. What a superb writer; what a superb book.”
—RON RASH,  New York Times bestselling author of Serena and Above the Waterfall

“This is writing that pulls no punches...There’s a satirist’s edge to [it], an over-the-top sensibility reminiscent of Tibor Fischer and John Kennedy Toole. Satire, to be sure, is part of the point, but Miles is after something bigger—a story of reconciliation, of redemption, of a character trying to become unstuck.
—David Ulin, Los Angeles Times

“A flinty, funny, irreverent, and heartbreaking first novel. The writing reminded me of brilliant, early-days Martin Amis—except with redemption and hope. It’s not easy to write a book this good, but Jonathan Miles makes it seem effortless.”
—Elizabeth Gilbert, author of Eat, Pray, Love

“Miles is a rare original who has pity and sympathy for almost everybody. Bravo.”
—Barry Hannah, author of Airships

“I loved this novel, which is strong medicine indeed.”
—Jim Harrison, author of Legends of the Fall


Praise for Want Not:

“Well, I loved this book. I don’t know if it helps you or anyone to delay that assessment, so I won’t. Jonathan Miles can write, and here he’s written a wonderful book, and there’s no one I would not urge to read it...This is the work of a fluid, confident and profoundly talented writer who gets more fluid, more confident and seemingly more talented even within the book itself. As it progresses, Want Not so assuredly accumulates power and profundity and momentum that I read the last 200 pages without pause.”
—Dave Eggers, The New York Times Book Review

“Immensely satisfying…while [Mr. Miles] is presumably capable of writing a bad sentence, he doesn’t do so here, despite the big swings he often takes with his prose…gripping and memorable.” —New York Times

“With a light Midas touch, Miles turns all the glut and ache of late America into pure gold...Read this book. It is warm, complex, comic, honest, and never flinching. Want Not wastes not a word, while its pleasures are endless.”
—Joshua Ferris, author of To Rise Again at a Decent Hour

“A powerful, blisteringly funny novel...Miles mines the depths of waste so artfully that by the end of this extraordinary novel, we’re left with the suspicion that redemption may well be no more, and no less, than an existential salvage operation.”
—Ben Fountain, author of Billy Lynn’s Long Halftime Walk

JONATHAN MILES is the author of the novels Dear American Airlines and Want Not, both New York Times Notable Books. He is a former columnist for the New York Times, has served as a Contributing Editor to magazines ranging from Details to Field & Stream, and his journalism has been frequently anthologized in Best American Sports Writing and Best American Crime Writing. He is also the author of a book on fish and game cookery, The Wild Chef, and competed in the Dakar Rally, an off-road race through Africa.

1. Anatomy of a Miracle opens as Tanya wheels her brother, Cameron, to their local convenience store, the Biz-E-Bee. This site is important to much of the novel’s action, being the scene of the seemingly miraculous moment when Cameron, formerly paralyzed from the waist down, steps out of his wheelchair and onto the asphalt of the store’s parking lot. What kind of atmosphere does this scene evoke? How does the routine of Tanya and Cameron’s daily errands speak to the circumstances of their life? Is it indicative of small-town life in the Deep South?

2. Jonathan Miles’s novel is set years after Hurricane Katrina, though Biloxi, Mississippi, is still defined by the storm. Where do you see Katrina’s lasting effects on the town?

3. What were your first impressions of Cameron and Tanya and of their brother/sister relationship? Early on, their home in Biloxi is described as “starkly devoid of family history,“ swept away with their possessions by the hurricane. Did your opinion of the characters develop as you gained insight to their backstories?

4. What do you make of the internet and social media’s role in the novel? Does it reflect things that you see on Facebook and Twitter?

5. What do you think of Cameron’s doctor, Janice? Is her confidence in science similar or different from the faith that other characters have in religion?

6. In the story, there is controversy about what constitutes a miracle. How would you define a miracle? Can one at once believe in miracles and doubt the existence of God?

7. Cameron struggles with feelings of guilt and unworthiness. Why do you think he feels this way?

8. How did you feel about the way people tried to capitalize on Cameron’s recovery? Think of the Biz-E-Bee’s conversion to a site of public pilgrimage with its own line of spiritual novelties for sale, or the reality television show, Miracle Man. Do you agree or disagree with attempts to make money off of Cameron’s life?

9. How do Cameron and Darmarkus react to postwar life and adapt to their injured bodies? Cameron agonizes over life’s what-ifs while Damarkus settles with what is. Does Damarkus exhibit acceptance for what happened? Does Cameron?

10. How did you react to the revelation about Cameron’s sexuality? Discuss the implications that this had for the public’s perception of Cameron. In light of this, why did many choose to denounce his recovery as a sign of divine intervention?

11. As an adolescent, Cameron recognizes that he is attracted to boys and not girls, but does not identify as “gay” because of the negative perceptions at his school and in popular culture. What do you think this struggle might have been like for him?

12. Tanya believes that a cocktail of antidepressants, sleeping aids, and anti-anxiety medication saved her brother’s life following his return from Afghanistan. How does this compare to the Cameron’s self-medication with alcohol and nonprescription drugs? Why are Tanya and Janice concerned when Cameron stops taking his medication?

13. What do you think of the reported style of the novel? How do you think the blend of fact and fiction reflects current cultural preoccupations with truth?

14. Honeybun chastises Griffin for wanting to represent Cameron’s recovery as a metaphor for self-acceptance. Did you read the “miracle” as a metaphor?

15. The last figure that we witness visiting the Biz-E-Bee tells Quŷnh that he prays for “love and understanding.” How do you think this message applies to the story overall?

16. Toward the novel’s end, Janice’s father, Winston Lorimar discusses science and religion with his daughter, arguing that storytelling is a way of understanding the world whether or not you believe in God. Do you agree with him?

17. Having finished reading the novel, do you think it “really matters” whether or not Cameron’s recovery was a miracle?