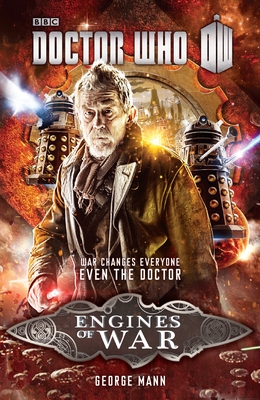 "I've had many faces. Many lives. I don't admit to all of them. There's one life I've tried very hard to forget-the Doctor who fought in the Time War."

The Great Time War has raged for centuries, ravaging the universe. The Daleks and the Time Lords deploy ever more dangerous weapons in desperate attempts at victory, but there is no end in sight.
On the outer rim of the Tantalus Eye, scores of human colony planets are now overrun by Dalek occupation forces. A weary, angry Doctor leads a flotilla of Battle TARDISes against the Dalek stronghold but in the midst of the carnage, the Doctor's TARDIS crashes to a planet below: Moldox.
As the Doctor is trapped in an apocalyptic landscape, Dalek patrols roam amongst the wreckage, rounding up the remaining civilians. But why haven't the Daleks simply killed the humans?
Searching for answers, the Doctor meets 'Cinder', a young Dalek hunter. Their struggles to discover the Dalek plan take them from the ruins of Moldox to the halls of Gallifrey and set in chain events that will change everything. And everyone.

GEORGE MANN is the author of the Newbury & Hobbes steampunk mystery series, as well as numerous other novels, short stories and original audiobooks. He has edited a number of anthologies including The Solaris Book of New Science Fiction and The Solaris Book of New Fantasy. He lives near Grantham, UK, with his wife, son and daughter.
or support indie stores by buying on
Copyright © 2020 American Booksellers Association