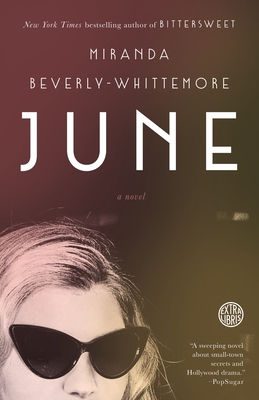 From the New York Times bestselling author of Bittersweet comes a novel of suspense and passion about a terrible mistake that changed a family forever, now in paperback and featuring an all-new Reading Group Guide

Cassie Danvers is holed up in her family’s crumbling mansion in small-town Ohio, mourning the loss of her grandmother, June. But the noise of the rusted doorbell forces her out of isolation. Cassie has been named the sole heir to legendary movie star Jack Montgomery's fortune.

Soon Jack’s famous daughters arrive, entourage in tow, determined to wrestle Cassie away from an inheritance they feel is theirs. Together, they come to discover the true reason for June’s silence about the summer she was eighteen, when Hollywood came to town, and June and Jack’s lives were forever altered. Shifting deftly between the past and present, Cassie and her guests will be forced to reexamine their legacies, their definition of family, and what it truly means to love someone, steadfastly, across the ages.

Praise For June: A Novel…

“This one was the perfect book at the perfect time, a real page-turner. . . . Masterfully handled dual timelines transition back and forth seamlessly. There is a bit of a gothic mystery, multiple love stories and heartbreak, blackmail, murder and even some dirty politics.”—Fredricksburg Free Lance-Star

“The glamour of old Hollywood and the haze of family secrets come to life in June.”—BookPage

“A sweeping novel about small-town secrets and Hollywood drama.”—PopSugar

“[June] has everything: an opulent house in a quaint small town in the Midwest, a surprise inheritance, the possibility of a secret love child, Hollywood melodrama, betrayal, family conflict, and so much more. It is just the book to take the mind off quotidian troubles.”—Sarah Weinman, The Crime Lady

"A crumbling family home, a shockingly large inheritance, a small-town mystery, and a high-wattage Hollywood star: June is atmospheric, ambitious, and filled with enough intrigue, betrayal, passion, and heartbreak to keep you reading all the way to the explosively satisfying end.”—Christina Baker Kline, #1 New York Times bestselling author of Orphan Train

"A delicious and delightful tale about what happens when small-town secrets and family bonds collide with the intrigue and romance of Hollywood. Beverly-Whittemore draws a rich and detailed portrait of two parallel summers that will draw you in from the beginning and keep you guessing until the end.”—J. Courtney Sullivan, New York Times bestselling author of Maine and Commencement

“At turns lush and tender, harrowing and poignant, Miranda Beverly-Whittemore’s June is historical fiction at its most masterful, and a love story rich in complication and heartbreak.”—Megan Abbott, award-winning author of Dare Me and The Fever

“When Miranda Beverly-Whittemore crosses small-town Ohio with Hollywood glamour, both come alive, breaking stereotypes and zooming in on their flawed, complicated denizens. Brilliantly weaving past and present, June is elegant and suspenseful, but refreshingly raw and intimate. Read it! From page one you'll find yourself in the hands of a master storyteller.”—Hilary Liftin, New York Times bestselling author of Movie Star by Lizzie Pepper

“A perfectly paced, compelling story of love, lust, and family secrets, June draws you into its gentle embrace, expertly waltzes you between present and past, mesmerizing until the very last page.”—Amy Hatvany, author of Somewhere Out There

“The past is not all glossy nostalgia; Beverly-Whittemore illuminates the conflicts roiling under a smooth, socially acceptable surface… Fans of Hollywood, then and now, will find this dramatic story line appealing.”—Library Journal

“Beverly-Whittemore offers up two interconnected tales of family secrets, 60 summers apart... the dual narratives are enjoyable both singly and in tandem as the novel explores the changing possibilities for women, the evolution of the Hollywood fame machine, and love's potential for genuine human transformation.”—Publishers Weekly

“Hollywood meets small-town Ohio in 1955, starting reverberations that last for generations… Beverly-Whittemore has fashioned an appealing story of romance and suspense with a focus on love and legacy.”—Booklist

“Love between a small-town girl and one of Hollywood's leading men leads to murder, blackmail, and secrets. Beverly-Whittemore returns with another charming page-turner, this time marrying old Hollywood elegance to Midwestern practicality . . . A lightly gothic tale of hearts broken and mended in small-town America.”—Kirkus Reviews

Miranda Beverly-Whittemore is the author of three other novels: New York Times bestseller Bittersweet; Set Me Free, which won the Janet Heidinger Kafka Prize, given annually for the best book of fiction by an American woman; and The Effects of Light. A recipient of the Crazyhorse Prize in Fiction, she lives and writes in Brooklyn.

1. In what ways is Lindie’s love for June the driving force in both of June’s storylines (1955 and 2015)? Do you think June loved Lindie in return?

2. Two Oaks is its own dynamic character in this book; have you ever lived or visited somewhere that felt “alive” in this way?

3. In what ways does Lindie buck convention, and how do the other characters respond to her moments of bravery and daring?

4. In 1955, when June and Jack met, he was a world-class movie star in his thirties, and she was an eighteen-year-old from a conservative small town; can a relationship succeed with that kind of power dynamic in play? Do you think Jack and June were truly in love?

5. Was Diane a sympathetic character? Why did she cling so tightly to Jack? Do you believe Jack loved her? Why did he agreed to marry her?

6. Did June do the right thing by taking Diane’s deal (chapter sixty)? Was this a sacrifice of love?

7. In your opinion, did Clyde deserve to die? Why or why not?

8. What were the consequences—both positive and negative—of Apatha and Lemon keeping their marriage a secret? How do you imagine the revelation of their status changed Eben and Lindie’s relationship to Apatha once they moved to Chicago and she moved to Louisiana (see chapter sixty-seven)?

9. Why did June stay with Artie even after Diane died, when she might have gone back to Jack without any repercussions for Lindie? Did June love Artie, as Lindie claims she did? Once June reconnected with Jack in their old age, why did she go to such great lengths to keep that love affair hidden, even from Cassie?

10. Let’s talk about bloodlines. In what ways does Tate resemble Diane, Elda resemble Jack, and Cassie resemble June? In what ways are these descendants different from their forbears, for better or worse?

11. How has the experience of being a movie star changed from 1955 to today? What are the consequences of celebrity? Would you want to be one?

12. Did Jack do the right thing by leaving everything to Cassie (and cutting Tate and Elda out of his will)? Why do you think he did so?

13. Will Nick and Cassie make their relationship work? Was Cassie right to forgive him for doubting her multiple times?

14. How will Cassie and Tate’s relationship develop beyond the confines of the book? Is it possible to cement familial ties even with those whose bloodline you do not share? Do you think Tate and Elda will be able to be “sisters” again?