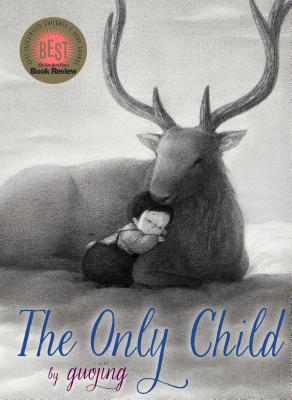 Hailed by Entertainment Weekly and the Wall Street Journal as a best book of the year, this gorgeous and imaginative story—part picture book, part graphic novel—is utterly transporting and original. USA Today declared it “a compelling and melancholy debut from an important new talent" as well as "an expansive and ageless book full of wonder, sadness, and wild bursts of imagination.” And like Shaun Tan's The Arrival and Raymond Briggs's The Snowman, it is quickly becoming a modern classic.

A little girl—lost and alone—follows a mysterious stag deep into the woods, and, like Alice down the rabbit hole, she finds herself in a strange and wondrous world. But... home and family are very far away. How will she get back there?

In this magnificently illustrated—and wordless—masterpiece, debut artist Guojing brilliantly captures the rich and deeply-felt emotional life of a child, filled with loneliness and longing as well as love and joy.

"Majestic.... Rare is the book containing great emotional depth that truly resonates across a span of ages: this is one such." —Kirkus Reviews, Starred

"Reminiscent of Raymond Briggs’s classic, The Snowman (1978), this is quiet, moving, playful, and bittersweet all at once." —Booklist, Starred

"A beautifully drawn adventure that slips effortlessly between dream and memory, as if these two worlds are actually one and the same: that distant place where the heart and mind must always travel before returning home, to know what it means to be lonely before knowing what it means to be loved." —Shaun Tan, creator of The Arrival and The Lost Thing

"The Only Child evocatively, and without a single word, reminds us that we all are hopelessly lost and then joyously found, again and again, throughout our lives." —Marla Frazee, two-time Caldecott Honor winner for All the World and A Couple of Boys Have the Best Week Ever

"Guojing's luminous pencil drawings create a world of such sensory presence that now I know what it feels like to run my hand across the snout of a great stag, swing by an antler onto its back and soar through the air; or to watch in awe as a giant sky-whale dives down into a sea of clouds. A wonderfully dizzying journey." —Paul O. Zelinsky, Caldecott Medalist for Rapunzel, and three-time Caldecott Honor recipient for Hansel and Gretel, Rumpelstiltskin, and Swamp Angel

“Rare is the book containing great emotional depth that truly resonates across a span of ages: this is one such.” —Kirkus Reviews, Starred

“Each arresting, softly penciled panel is surprisingly luminous in spite of its monochromatic palette, and in those gentle scenes, Guojing evokes a wide range of feeling, especially the lonesomeness of the little girl, who never quite seems at ease alone. Reminiscent of Raymond Briggs’ classic, The Snowman (1978), this is quiet, moving, playful, and bittersweet all at once.” —Booklist, Starred

"In Guojing's beautiful, wordless storybook, a little Chinese girl left home alone wanders off into the snow and has magical cloud adventures with a benevolent stag." —Shelf Awareness, Starred

Guojing is an illustrator from the Shanxi Province of China. Since graduating from the Tianjin Academy of Fine Arts, she has worked as a concept artist for games and animated television shows. Due to China's birth control policy, Guojing is an only child, and she has drawn on her childhood memories of loneliness and isolation while developing this, her first book.
Loading...
or
Not Currently Available for Direct Purchase