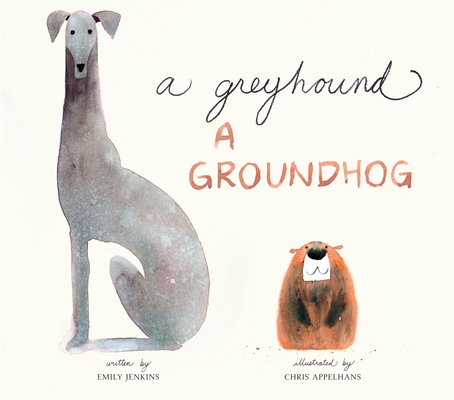 A Greyhound, a Groundhog

"But what Emily Jenkins and Chris Appelhans’ lyrical collaboration is really about is the intoxicating thrill of friendship, and boundless joy of play..." –The New York Times

Winner of the 2018 Zena Sutherland Award for Best Text

With very spare, incredibly lively language, this is an entertaining read-aloud, with two amazing—and oh-so-adorable—characters at its heart.

“Appelhans, whose career up to now has been in animated films such as Coraline, is a revelation.” —Booklist, Starred, on Sparky!, illustrated by Chris Appelhans

Praise For A Greyhound, a Groundhog…

"But what Emily Jenkins and Chris Appelhans’ lyrical collaboration is really about is the intoxicating thrill of friendship, and boundless joy of play..." –The New York Times

"This delightful story is a feast for the eyes and ears, and it will hold up well to repeated demands from eager young listeners."— Kirkus, starred review

"A lovely, lyrical paean to the natural order, with an element of wonder and grace. Perfect for one-on-one and group sharing." — School Library Journal, starred review

"This unusual duo will make a heartwarming addition to any read-aloud collection." — Booklist, starred review

Emily Jenkins has written many highly acclaimed books for children, including the picture book Toys Meet Snow, a New York Times Notable Book and a Wall Street Journal Best Children’s Book of the Year, and the popular, award-winning chapter books that feature the same beloved characters, Toys Go Out, Toy Dance Party, and Toys Come Home. She is also the author of A Fine Dessert, a New York Times Best Illustrated Book of the Year; Water in the Park, a Booklist Editors’ Choice and a Bulletin Blue Ribbon Book; and Lemonade in Winter, a Publishers Weekly Best Book of the Year. Visit the author at emilyjenkins.com.

Chris Appelhans was selected as the Children’s Choice Illustrator of the Year at the Children’s Choice Book Awards for Sparky!, written by Jenny Offill. The book received two starred reviews, including one from Booklist declaring, “Appelhans is a revelation.” Chris has also worked on several films, as an illustrator and a production designer for Coraline, an environment designer for Fantastic Mr. Fox, and a visual development artist for The Princess and the Frog.
Loading...
or support indie stores by buying on