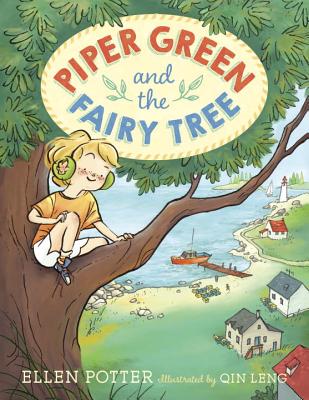 Piper Green and the Fairy Tree

From award-winning author Ellen Potter comes a charming new chapter book series where kids, lobster boats, and a hint of magic are part of everyday life.

There are three things you should know about Piper Green:
1. She always says what’s on her mind (even when she probably shouldn’t).
2. She rides a lobster boat to school.
3. There is a Fairy Tree in her front yard.

Life on an island in Maine is always interesting. But when a new teacher starts at Piper’s school—and doesn’t appreciate the special, um, accessory that Piper has decided to wear—there may be trouble on the horizon. Then Piper discovers the Fairy Tree in her front yard. Is the Fairy Tree really magic? And can it fix Piper’s problems?

★“Skillfully blending humor, pathos, and warmth with an atmospheric setting, Potter has created an honest, empathic slice-of-life story, laced with a touch of magic. Piper has a winning combination of stubbornness, loyalty, and independence, which Leng ably portrays in her loosely inked, gently humorous artwork.”
—Publishers Weekly, starred review

“With its intriguing setting, sympathetic characters, and hint of magic, this new chapter-book series should charm fledgling readers.” —Kirkus Reviews

“Piper is brave and tough on the surface, and her sense of loss lies at the heart of the conflict. Written with humor as well as pathos, the first-person text shows her confused emotions and her resiliency as well. An appealing debut for the series.” —Booklist

“Potter puts her own stamp on the spunky-quirky-stubborn girl story. . . . A satisfying, accessible, funny early chapter book.” —The Horn Book

Praise For Piper Green and the Fairy Tree…

Although she doesn’t ride a lobster boat to work, Ellen Potter can look out her window and see islands, just like the one Piper lives on. Ellen is the author of ten books for children, including the award-winning Olivia Kidney series, Slob, and The Kneebone Boy. She lives in Maine with her family and an assortment of badly behaved creatures. Learn more about Ellen at ellenpotter.com.

Qin Leng was born in Shanghai and lived in France and Montreal, where she studied at the Mel Hoppenheim School of Cinema. She has received many awards for her animated short films and artwork, and has published numerous picture books. Qin currently lives and works as a designer and illustrator in Toronto.
Loading...
or
Not Currently Available for Direct Purchase