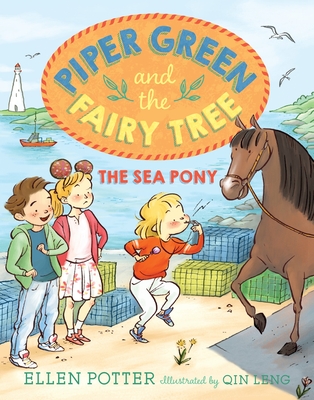 Piper Green and the Fairy Tree

Move over Junie B. Jones! Get to know Piper Green as she discovers the ordinary magic right outside her front door.

Piper Green is in for another adventure when she finds an unusual whistle hidden inside the Fairy Tree in her front yard. But Piper doesn’t want a whistle... she wants a pony! On a trip with her dad to check the family’s lobster traps, the whistle attracts the attention of an unexpected friend. Could the fairy whistle be working its magic after all?

Praise For Piper Green and the Fairy Tree: The Sea Pony…

Ellen Potter is the author of ten books including the bestselling Olivia Kidney series, as well as award winning novels, SLOB, The Kneebone Boy, and The Humming Room. Her most recent series for boys, Otis Dooda: Strange But True, is a Cybils nominee. Learn more about Ellen at ellenpotter.com

Qin Leng was born in Shanghai and lived in France and Montreal, where she studied at the Mel Hoppenheim School of Cinema. She has received many awards for her animated short films and artwork, and has published numerous picture books. Qin currently lives and works as a designer and illustrator in Toronto.
Loading...
or support indie stores by buying on