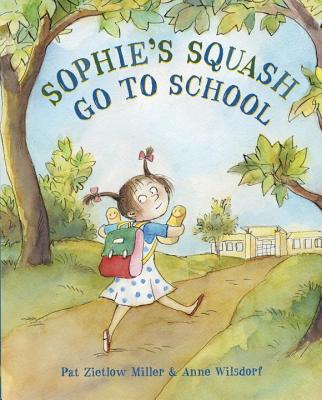 This charming sequel to the beloved Sophie’s Squash is the perfect antidote to the back-to-school jitters! Sophie goes to school for the first time and has no interest in making friends that aren’t squash. Here’s a gently humorous read-aloud that proves that making friends, just like growing squash, takes time.

On Sophie’s first day of school, nobody appreciates her two best friends, Bonnie and Baxter, baby squash that she grew in her garden. Even worse, one classmate, Steven Green, won’t leave Sophie alone. He sits by her at circle time. He plays near her during recess. And he breathes on her while she paints. Steven just wants to be friends, but Sophie isn’t interested. Still, Sophie knows that her squash friends won’t last forever. Maybe it would be nice to have some human friends after all. . . .

"While in many picture books problems are solved quickly, Miller makes clear that it takes time, as well as reflection and effort, for Sophie to decide that she wants friends and to figure out how to make them. The character is shy, strongwilled, and resistant to change, qualities many children will relate to as they start school."--Booklist, Starred Review

“By book’s end, most readers will be willing to side with Sophie’s parents, who remind her that it’s good to have friends: ‘Especially human ones.’”--Publishers Weekly, Starred Review

Pat Zietlow Miller received an Ezra Jack Keats New Writer Honor for Sophie’s Squash, her picture-book debut, which was published to four starred reviews and named a Charlotte Zolotow Honor Book. She is also the author of the picture books Wherever You Go and Sharing the Bread: An Old-Fashioned Thanksgiving Story. She lives in Madison, Wisconsin. Visit the author at patzietlowmiller.com.

Anne Wilsdorf’s illustrations for Sophie’s Squash were described as “bursting with color and energy on every page” in a starred review by Booklist. She has illustrated numerous other books for children, including My Dog’s a Chicken by Susan McElroy Montanari, Dogs on the Bed by Elizabeth Bluemle, The Best Story by Eileen Spinelli, Alligator Sue by Sharon Arms Doucet, and the Ruby Lu series by Lenore Look. She lives and works in Lausanne, Switzerland.
Loading...
or
Not Currently Available for Direct Purchase