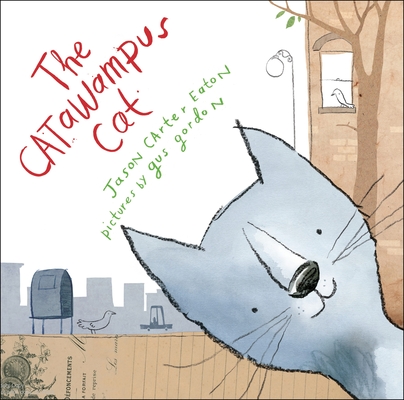 A tilted tale about a cat who sees the world from an unusual point of view, written by the hilarious Jason Carter Eaton (How to Train a Train) and illustrated by the equally humorous Gus Gordon (Herman and Rosie).

Praise For The Catawampus Cat…

Jason Carter Eaton was born at a 44-degree angle and has only gotten more diagonal with age. He now leans so far over that he’s nearly upside down. While attempting to write his life story, he accidentally composed several children’s books, including Great, Now We’ve Got Barbarians!; Bubble Trouble; How to Train a Train; and How to Track a Truck. He also wrote the story for the film Ice Age: Dawn of the Dinosaurs, which few people realize was meant to be performed entirely in a Swedish accent. Jason lives in a very off-kilter house in Tarrytown, New York, with his way sideways wife, two tilting children, a diagonal dog, and of course, a catawampus cat.

Gus Gordon cannot remember a time when he has stood in a perfectly upright position. He walks with such a perilous lean that most people think he is about to topple over, so this book seems quite normal to him. Admittedly he is tired of walking in circles and continually grazing his ears on the sidewalk. Gus is an author and illustrator of more than eighty children’s books. His most recent picture book, Herman and Rosie, has won many awards and has been sold into twelve countries. Gus lives in Australia in his leaning house with his wife, three kids, and a skew-whiff cat called Pippin. Visit him at gusgordon.com.
Loading...
or
Not Currently Available for Direct Purchase