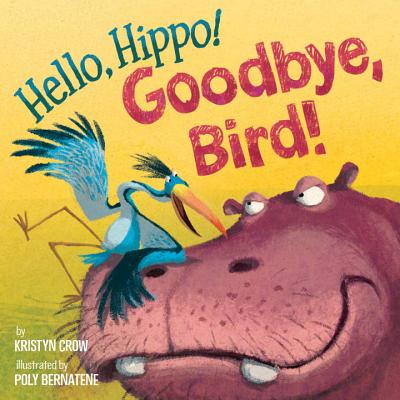 A hilarious picture book about a grumpy hippo, a persistent bird, and a delightful friendship!

Bird makes a great hat for Hippo. He tells hilarious hippo jokes. He keeps the bugs away (can you say lunch!?).
Hippo wants Bird to GO AWAY.

But then the sky gets darker. And darker.
Thunder crashes all around.
Maybe Hippo could use a friend?

"Crow’s warmhearted buddy tale is generously infused with energetic humor, and Bernatene depicts both Hippo and Bird with a perfect balance of gruff and goofy, reluctance and excitement. Against the backdrop of a teeming African landscape, and while flamingos, zebras, a rhino, elephant, antelope, and giraffe look on, author and artist show how frenemies become BFFs. What’s not to love about that?" —Booklist

"This humorous tale of two unlikely companions is an entertaining discussion starter for children about how (and how not) to make friends." —School Library Journal

"Scenes of Hippo submerged underwater, frolicking idyllically in the grass, and wailing in terror in the storm steal the show. Though unlikely-friendship tales are a dime a dozen, this humorous, fun-filled take is well worth a look." —Kirkus

Kristyn Crow's first book, Cool Daddy Rat, received starred reviews and was named a Bulletin Blue Ribbon Book. She is also the author of Zombelina and Bedtime at the Swamp. Kristyn is the mother of seven wonderfully creative children and is married to a policeman, who doubles as a mad scientist/inventor. Visit Kristyn at KristynCrow.com.

Poly Bernatene graduated from Buenos Aires Art School and has worked across many different genres, including advertising, animation, and comic books. He has illustrated more than 60 children's books all over the world, including Ribbit!, written by Rodrigo Folgueira. He lives and works in Argentina. Visit him on the Web at Poly-Bernatene.blogspot.com.
Loading...
or
Not Currently Available for Direct Purchase