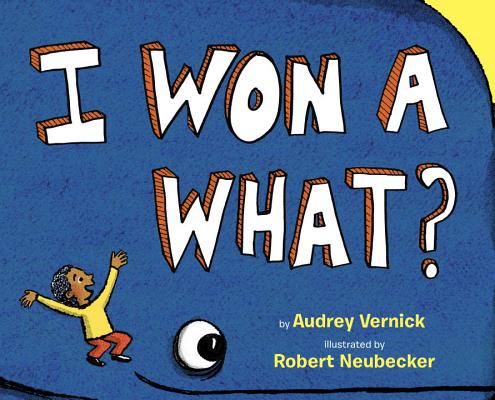 I Won a What? (Hardcover)

The hilarious and heartwarming story of a boy who tries to win a goldfish and winds up with FAR more than he bargained for . . .

A young boy wins a humongous new pet at the carnival, and before long, they become fast friends. But his parents are skeptical. After all, Nuncio doesn’t even fit in the house! Will the gargantuan goldfish have to go? Or will the family find a way to give him the home he deserves?

Fans of Sparky will flip for this whale of a tale from Audrey Vernick, author of Is Your Buffalo Ready for Kindergarten? and featuring illustrations from Wow! City! illustrator Robert Neubecker.

Audrey Vernick writes fiction and nonfiction for kids and teens. She never had a pet goldfish as a child, but she did have two gerbils named Guru Maharishi Darling 1 and 2. Audrey is a two-time recipient of the New Jersey Arts Council's fiction fellowship, and her books include the critically acclaimed Brothers at Bat and Is Your Buffalo Ready for Kindergarten? She lives near the ocean with her husband, son, daughter, and two dogs. For her next pet, Audrey really wants a baby goat. Visit her at AudreyVernick.com.

Robert Neubecker draws for Slate.com, the Wall Street Journal, and the New York Times. He is the award-winning author-illustrator of Wow! City!, Wow! Ocean!, and Linus the Vegetarian T. Rex. Robert lives in Park City, Utah, with his family, dogs, cats, and lizards. Visit him at Neubecker.com.

Praise For I Won a What?…

"With a simple text and entertaining illustrations, this is a heartwarming picture book—and what happens on the very last page is downright beautiful." —School Library Journal

"A whale of a tale.... Move over Clifford the Big Red Dog."—Kirkus

"Tons of fun.... [Nuncio] is the Clifford of fish." —Booklist
or
Not Currently Available for Direct Purchase
Copyright © 2020 American Booksellers Association