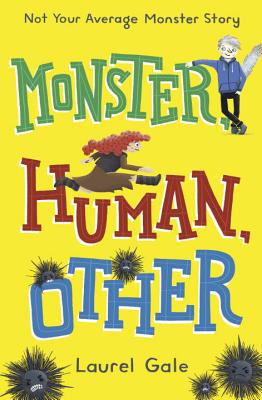 For readers of Neil Gaiman’s Coraline and Jonathan Auxier’s The Night Gardener comes a perfectly peculiar tale that shows the scariest monsters are often the ones we create for ourselves.

MONSTER.
Isaac Read doesn’t feel like a monster. He’s just like every other kid on his block—as long as he tapes down his tail, that is!

HUMAN.
Wren wishes her adopted family would stop teasing her about her lousy sense of smell and poor sense of direction. It’s not her fault she doesn’t have their sensitive snouts and keen eyesight.

OTHER.
The overcrowded voracans hate getting walked all over—literally. They live underground.

Broken promises and new alliances spell trouble for Wren and Isaac as the voracans try to claw their way to the top—and bring some unlikely suspects with them!

Praise For Monster, Human, Other…

"A stinky, creepy tale for anyone who's ever felt like an outsider." -Kirkus Reviews

"A magical and mythical story of loneliness, courage, friendship, and living life to the fullest-even when you aren't technically 'alive.'" -Reading Rainbow

Laurel Gale lives with her husband and their own tiny monsters—also known as ferrets—in Vancouver, Washington. She is also the author of Dead Boy, which Reading Rainbow called “a magical and mythical story of loneliness, courage, friendship, and living life to the fullest—even when you aren’t technically ‘alive.’” You can visit Laurel online at laurelgale.com or on Twitter at @Laurel_Gale.
Loading...
or
Not Currently Available for Direct Purchase