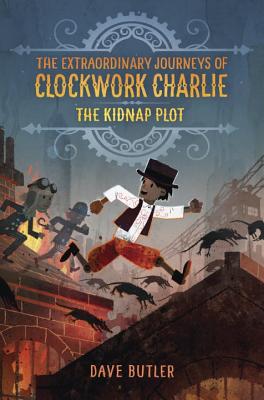 The Kidnap Plot (The Extraordinary Journeys of Clockwork Charlie)

Meet Charlie. He lives a quiet life with his protective father, an inventor and clockmaker.

When Charlie’s father is suddenly and mysteriously kidnapped by a shadowy group called the Anti-Human League, it’s up to Charlie to save him. Before long, he has assembled a motley crew to help. From the terrifying but well-meaning troll Grim Grumblesson to the high-flying young aeronauts Bob and Sir Oliver, this team will follow the trail anywhere.

But the league’s plan is much more sinister than Charlie could have imagined. And as he unravels the secrets of the league, he also uncovers his father’s own secrets—about his family, the league, and even himself...

Can Charlie and his gang rescue his father from the dastardly villains who have kidnapped him? And will Charlie be able to come to terms with who he really is? The journey begins here!

Praise For The Kidnap Plot (The Extraordinary Journeys of Clockwork Charlie)…

"Reminiscent of both Pinocchio and The Great Mouse Detective, this novel is tailor-made for young readers who love adventure narratives and steampunk fiction."—Kirkus Reviews

“The fast-paced plot is action-packed but leaves room for Charlie’s coming-of-age journey… [The Kidnap Plot] should satisfy fans of fantasy and adventure.”—Publishers Weekly

“It’s a strong start to a new series—the characters are diverse, and Butler creates a smoky, grimy, harsh England that is almost a living character in itself. Readers will happily keep an eye out for the next volume.”—The Bulletin for the Center for Children’s Books

Dave Butler lives in an old house and works in a study where one of the biggest bestsellers of the twentieth century was written. He has kept the room’s original shag carpet and wood-veneer walls. He likes games, guitars, languages, and, most of all, his family. Dave lives in Provo, Utah. You can find him on the Web at davidjohnbutler.com.
Loading...
or
Not Currently Available for Direct Purchase