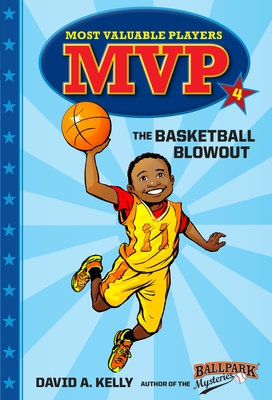 The Basketball Blowout (Most Valuable Players #4)

From the author of the Ballpark Mysteries comes the coolest sports club around—the Most Valuable Players!

The MVP club needs to raise money for their basketball tournament. At first, they think selling popcorn will be easy . . . but then Luke eats more popcorn than he sells! Plus there’s a new kid at school who might need the money even more than the team does. Can the MVP kids raise enough money, win the tournament, and help their friend?

Perfect for kids who love to compete in all kinds of contests and have fun with great friends, David A. Kelly’s series teaches readers that when you’re a most valuable player, you love sports, always show spirit, and never give up! Don’t miss bonus sports facts in every MVP book.

Praise For MVP #4: The Basketball Blowout (Most Valuable Players #4)…

“This series opener is a promising venture into early Matt Christopher territory.” —Kirkus Reviews on MVP #1: The Gold Medal Mess

David A. Kelly is a former Little League right fielder. These days, he can often be found enjoying a game at a major-league park. He is also the author of the Ballpark Mysteries series and Babe Ruth and the Baseball Curse. He lives near Boston’s Fenway Park with his wife, two sons, and his dog. Visit him online at davidakellybooks.com
Loading...
or support indie stores by buying on